FA to investigate after discovery of Andre Grays homophobic tweets 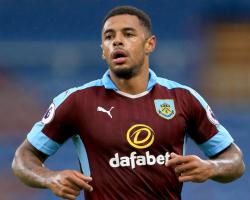 Press Association Sport understands the governing body are investigating the tweets which came from the 25-year-old's official account when he was still a non-league player.

Gray, who scored for the Clarets in a 2-0 victory over Liverpool at Turf Moor, apologised in a statement on Saturday night and asked for forgiveness.

One of his messages, posted in January 2012 when he was with the now defunct Hinckley United, read: "Is it me or are there gays everywhere? #Burn #Die #Makesmesick"

Last season's Championship player of the year endured a troubled past and has a scar on his face from a knife attack he suffered during gang trouble in the midlands, and though he stressed in his statement that he was a changed man from the one who posted such thoughts on Twitter, the FA are still set to look into his comments.

In his statement, Wolverhampton-born striker Gray had written: " I want to offer a sincere and unreserved apology to anybody I may have offended in relation to these tweets

"Thankfully a lot has changed in my life since then

I have experienced a lot over the past four years and have had to take responsibility for a number of things in my life which has enabled me to mature and grow as a person since that time.

"I have a lot of regrets regarding a number of things I've done in the past and realise I have made some big mistakes, none more so than these tweets, but I would like to stress that I've worked incredibly hard to completely transform my life since that time.

"To clarify, I do not hold the beliefs written in those tweets whatsoever

I can assure everybody that I am absolutely not homophobic and as said previously I can only apologise and ask for forgiveness to anyone I offended."

Should Gray incur either a fine or a ban, he would not be the first professional footballer to be punished for comments made on social media, with ex-England duo Ashley Cole and Rio Ferdinand among those to have landed in hot water for Twitter posts.

In 2015 Robert Huth, then on Stoke's books, was suspended for two games having been found to have been in breach of rules relating to comments which are indecent, improper, or bring the game into disrepute.

And in June of this year, the FA gave Coventry's Chris Stokes a one-match ban for homophobic remarks he posted on Twitter one month earlier.

In the same month Gray's tweet was posted in 2012, then-Leicester defender Michael Ball was fined ÃÂ£6,000 by the FA for homophobic comments posted on Twitter while Federico Macheda was fined ÃÂ£15,000 for writing something similar later that year.