Dyche reunites with Sordell at Burnley 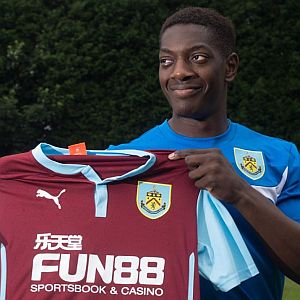 When the news broke last week that we were making a move for Sordell, a player out of favour at Bolton and who was sent out on a season long loan to Charlton last season, it came as a big surprise to most Burnley fans.

It certainly did to me but perhaps it shouldn't have. Dyche and Sordell know each other well. They were at Watford together and Sordell was in the side that Dyche managed for the first six months of the 2011/12 season.

What was also a surprise to me was his age. I envisaged that he was considerably older than the 23 he actually is but that's probably because he was playing first team football at Watford at the age of 18.

He'd come through the youth system there and was under the tutelage of Dyche with both of them stepping up to the first team in 2009. Dyche became assistant manager to Malky Mackay in the summer of 2009 when Brendan Rodgers moved on and on the second Saturday of the 2009/10 season Sordell was given his chance, coming on as a substitute for Nathan Ellington in a 2-0 defeat at Sheffield United.

At the end of the month he'd got a first start in a 1-1 draw at Swansea and by then he'd scored his first Watford goal in a 2-1 Carling Cup defeat at Leeds.

It wasn't the start of a great run in the side and he didn't play again until February and that was for Tranmere where he spent the second half of the season on loan. He scored just once for Tranmere in a 2-1 win against Leyton Orient at Prenton Park with the other goal coming from strike partner Ian Moore.

On his return he got one substitute appearance for Watford and scored his first league goal for the Hornets in a 4-0 win at Coventry.

The 2010/11 season saw him get his break at Watford and he was a regular throughout the season. He scored 15 goals, 12 of them in the league, in 46 appearances which included both games against Burnley. He didn't score in either.

With Dyche replacing Mackay as manager that summer there was no let up from Sordell who netted another ten goals going into the New Year, and with Watford's financial position there was a lot of speculation that he could be sold.

He looked odds on to rejoin his old boss Mackay at Cardiff but at the eleventh hour an offer of over £3 million came in from Bolton. On 31st January he was left out of the Watford team at Millwall by owner Laurence Bassini and when asked after the game, Dyche said: "All I know is a Premier League club are on the verge of making a deal."

He said the decision was out of his hands and when asked if he was keeping his eye on the clock, he joked: "I'm not watching the clock at all, but there is an hour, one minute and 20 seconds left of the transfer window."

Sordell has a reputation for being a heavy user of Twitter and he used that medium to say goodbye to all at Watford. In a series of tweets he said: "I loved every minute at the club and will never have a bad word to say about anybody there.

"I'd like to thank everybody at the club and in particular the manager, Sean Dyche, for guiding and helping me to improve as a player and a person."

Since leaving Vicarage Road, and despite playing at under-21 level for England and being part of Team GB in the Olympics, his league career has stalled. He made just three substitute appearances in the Premier League before Owen Coyle's team were relegated and had to wait until the first game of the 2012/13 season at Burnley to get his first Bolton start.

He's started just 13 league games for Bolton, adding a further 12 as a substitute, and he's scored four league goals for them, although he also scored four FA Cup goals for them, including both in a 2-0 replay win at Sunderland, having scored in the first game, and one at his old club Watford.

His last game for Bolton was in May 2013 before he spent last season at Charlton for whom he scored seven times and found some form towards the end of the season under Jose Riga.

He had a year remaining on his Bolton contract but a move always looked likely this summer and Dyche has stepped in to sign the player he knows so well with Sordell joining the Clarets on a three year contract.