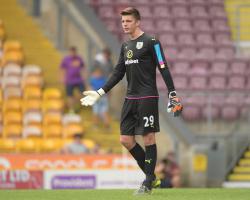 Burnley travel to the London Stadium on Saturday to take on relegation haunted West Ham United along with a full contingent of travelling ClaretsÃâ fans. (Kick-off 15.00 GMT)

Sean Dyche will be plotting to add even more misery for the IronsÃâ gaffer David Moyes, a manager who has never been considered a favourite with the legion of Burnley fans who will take their places in the completely sold out allocation for away supporters.

Burnley are looking to secure a spot in Europe for next season, while at the other end of the table the Hammers are fighting to retain their place in the English Premier League for the 2018/19 campaign

This game has all of the ingredients for a real footballing clash of Claret and Blue.

Jack Cork, James Tarkowski and Nick Pope along with Burnley skipper Tom Heaton all have their eyes set on being selected by England supremo Gareth Southgate.

The ClaretÃâs Johann Berg Gudmundsson looks to be all set to secure his place with the Icelandic World Cup squad and this seasonÃâs Burnley sensation, striker Ashley Barnes, is being scouted on Saturday by Austrian head coach Franco Foda, who will no doubt also be running the rule over the HammerÃâs Marko Arnautovic.

Having broken their winless streak against Everton with a battling 2-1 victory last Saturday, Sean DycheÃâs Clarets will be aiming to secure seventh spot with another away win and continue on their march to a place in the Europa League.

With World Cup places up for grabs and now that Sean Dyche has Arsenal firmly in his sights, I can find no greater motivation for ÃÂ Burnley to go all out for victory at the London Stadium

The ingredients are in the mix, who will have their cake and eat it?

Chris Wood freshly returned to the Clarets squad following injury, came off the bench at half-time last week and in partnership with Ashley Barnes terrorised the Toffees defence.

Barnes and Wood each bagged a goal in the Everton game and I expect the team that finished so strongly against the Blues to start in a 4-4-2 formation: Pope, Lowton, Mee, Tarkowski, Ward, Lennon, Cork, Westwood, Gudmundsson, Wood and Barnes.

In football miracles do happen

Is it even possible Aaron Lennon, a player who has settled so nicely into DycheÃâs all action playing style, could force himself back into the England World Cup reckoning?

Burnley want a win, West Ham United desperately need a win but given BurnleyÃâs return to winning ways, three points for the visitors looks to be the banker bet (TEC).ÃÂ