Clarets International Brigade on Parade at The Hawthorns 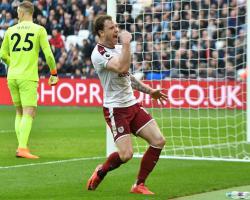 Fresh from their travels, the ever-growing band of Burnley international players have returned for duty as the Clarets aim to avenge an early season 1-0 home defeat to the Baggies.

Following two straight wins, including a 3-0 away victory at the London Stadium in exceptionally trying circumstances, Sean Dyche will be attempting to throw even more oil on PardewÃâs relegation funeral pyre.

Burnley old boy Jay Rodriguez will be amongst the men from the West Midlands side who will be hoping to stall BurnleyÃâs unexpected march to Europe and earn three valuable points as the Baggies battle to stave off a return to Championship football.

The big question looming large for Sean Dyche is whether to retain faith in World Cup hopeful Pope or select the fit again England shot stopper and Burnley skipper Tom Heaton. ThatÃâs quite a quandary for the Burnley gaffer!

The Burnley centre back will look to impress from now on in and earn himself a seat on the England aeroplane to Russia for the World Cup finals.

If DycheÃâs recent tactics are any barometer the Baggies will need at least a one goal cushion before Burnley try to nick all three points in the final quarter of the game.

For what it is worth, I am putting my money on a 2-0 away win for the Clarets, with the relentless Ashley Barnes scoring again as he presses his claim for a place in the Austrian World Cup squad (TEC).