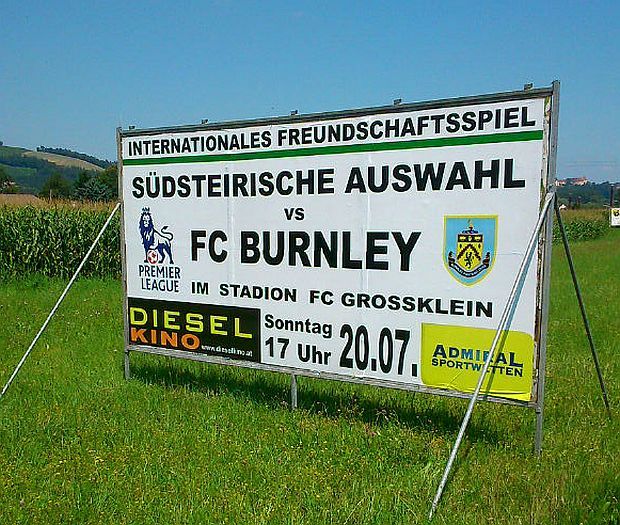 We went into the game without the services of Tom Heaton, Steven Reid, Luke O'Neill and Dean Marney as well as Michael Kightly and Sam Vokes. We've known all week that Kights would be on the sidelines and yesterday it was revealed that Marney had flown home with an Achilles injury.

That meant some extended game time for some of the younger players with all of Cameron Dummigan, Steven Hewitt and Jason Gilchrist starting the game for a Burnley team that for the first time, certainly as far as I know, was playing in all black.

It took until the 11th minute for the Clarets to open their pre-season account and appropriately it was our Austrian international Ashley Barnes who gave us the lead, this having already had one goal ruled offside.

It was a simple finish after Danny Ings had moved on a ball in from Hewitt but his, and Burnley's second, was a good goal as Gilchrist played him in.

The former Brighton man only played for the first half hour and was substituted at the second drinks break, giving Marvin Sordell his first action for the Clarets, and he made it 3-0 just after a rare attack from our hosts took them close.

Sean Dyche made several changes at half time which included the withdrawals of both Dummigan and Gilchrist, but both came back on during the second half.

Those changes saw the introduction of Lukas Jutkiewicz and he, like Sordell, was on the mark for his first Burnley goal on the hour, taking the ball past the goalkeeper before scoring.

Scott Arfield volleyed home for number five before Jutkiewicz got his second and hour sixth with a header.

As we went into the closing minutes there was a second too for Sordell before Gilchrist, two minutes from time, got his first ever goal in a first team shirt.

I'm sure we won't come up against sides like this in the Premier League but I'm equally sure that the manager will have seen this as a good workout for his squad to bring their week in Austria to an end.

There appeared to be a sizeable contingent of Burnley fans who were certainly making some noise. In six days time I'm sure there will be considerably more as we make our first visit to Accrington for a few years to kick off the home based friendlies.

And a reminder of the goals.