​Burnley goalkeeper Tom Heaton has admitted that he has faced difficulties following the arrival of Joe Hart as competition for his place at Turf Moor.

Former England number one Hart joined Sean Dyche's side last summer following a loan spell with West Ham, finally departing Manchester City after 12 years on the books at the Etihad.

INTERVIEW: Tom Heaton on the complex relationship at Burnley with rival and team-mate Joe Hart, the pain of being dropped and keeping in touch with Sir Alex Ferguson https://t.co/SkESKkDlx5 | @Ian_Ladyman_DM pic.twitter.com/xmTJMMXXEF

The 31-year-old arrived to provide competition in goal for compatriots Tom Heaton and Nick Pope in Sean Dyche's side. Speaking to the ​Daily Mail, Heaton recalled on Hart's signing for the club: "Joe says [on the phone]: 'Look it's a strange one but I wanted to run this by you... I am signing for your club'.

"We have known each other for a long time from ​Man City and ​Man United and he was brilliant with me on my first England trip. So that must have been a really difficult phone call for him to make and I thought it was outstanding from him.

"For me? I just had to get my head round it. It was surprising, I have to say. But it was the manager's decision. I had to get on with it."

Hart's signing at ​Burnley had an immediate impact on Heaton as the former was named in Sean Dyche's starting XI for their first game of the season ahead of the long-serving club captain.

"That was a different level," Heaton added. "Joe was at the club, yeah, but I was fit and expected to be playing. So I was hurting, I won't lie but immediately I have to give Joe the support he needs, I can't let him down, can I?

"If Tottenham win at Burnley, and Man Utd beat Liverpool, the title is in Spurs hands!"

"They've also got a 3 week break in March!" @talkSPORTDrive explains how #THFC can win the Premier League!

"We talked it through. No problem. But inside I was struggling."

Heaton has since regained his place in the Clarets' side, having started in all of Burnley's last seven Premier League games ahead of Hart.

The former Manchester City goalkeeper's last league start came in the 5-1 defeat at home to ​Everton before being replaced by Heaton, who has since returned to strong form for Burnley. 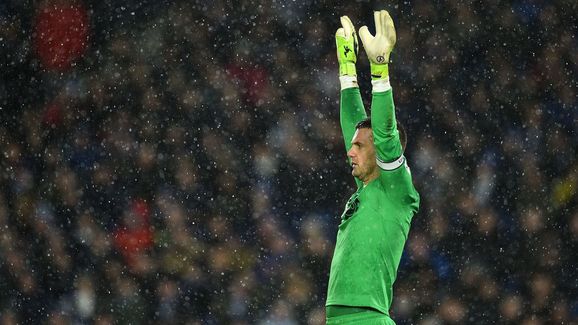 However Heaton's eight Premier League starts this term are significantly bettered by Hart's 19 appearances under Dyche so far, though Heaton's recent string of impressive performances seem to have turned the tide in his favour once more.