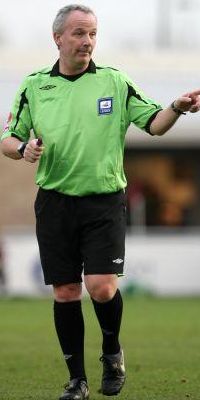 He had an absolute nightmare in the first of those two games, Eddie Howe's first home league game in charge of the Clarets against Norwich with probably the most controversial of the decisions being that which allowed Adam Drury to remain on the pitch after a shocking challenge on Tyrone Mears.

We won that game but lost on his next visit, last season's home game against Reading, when he had a much better game.

Gibbs had spent a few years refereeing in the Conference before winning promotion to the Football League ahead of the 2008/09 season. He was allocated just one Championship game in that first season, Swansea's home game against Preston in January 2009.

He still referees mainly in the lower divisions but tonight will be his sixth Championship games this season in what will be his 16th game. In the previous 15 games there have been 37 yellow cards and one red card.

Of those yellow cards, 19 have gone to home team players and 18 to away team players. The one player he has sent off is Gillingham's Bradley Dack in their 1-0 home win against Southend.

He hasn't refereed since 11th November. That was Charlton's 2-0 win at Ashton Gate in the Championship game against Bristol City. There were no cards in that game.

Having scored a poor 25.42 in RATE THE REF in that Norwich game he has now recovered and his current rating after two games is 41.46 and he's currently in 60th place.