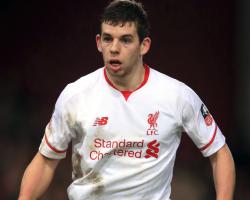 Flanagan, 23, signed a new long-term contract with the Reds in March, but has been allowed to go out on loan in search of regular first-team football.

Liverpool boss Jurgen Klopp has previously spoken highly of the defender who made a return to action late last season after 20 months out through injury.

Flanagan underwent two knee operations during his time out as his blossoming career, which has already earned him an England cap, was slowed.

The full-back has made more than 50 first-team appearances for the Reds since making his debut aged 18 and made his sole England appearance against Ecuador ahead of the 2014 World Cup - when he was listed as one of Roy Hodgson's stand-by players.

Flanagan is Burnley's third signing of the summer after Johann Berg Gudmundsson and Nick Pope arrived at Turf Moor.