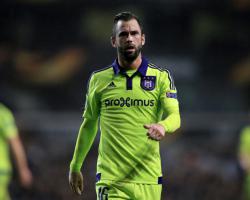 The 28-year-old, who has won 46 caps for his country, has penned a three-year deal at Turf Moor for a fee understood to be in the region of ÃÂ£7.5million that eclipses the initial ÃÂ£6million the Clarets spent on striker Andre Gray last summer.

Defour has become Burnley's fourth signing of the transfer window and will give Sean Dyche the central midfielder he has been craving since Joey Barton left Turf Moor to join Rangers after their promotion.