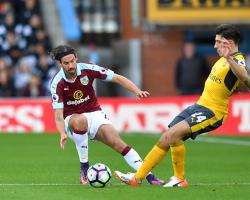 The 31-year-old is renowned for his tireless work in the engine room and is always close to the top of the running statistics in any given match.

Going into the international break he stood comfortably clear in terms of sprints performed, having racked up a lung-busting 555 in seven Premier League games.

And his hard work has not gone unappreciated in the dugout.

For George to be showing on the top side of that is fair play and good credit to him," Dyche said ahead of Sunday's trip to Southampton.

"I say this to a lot of younger players: games are maybe 95 minutes, roughly speaking

You better be making runs to get the ball, defending, getting in your shape, if you've got the energy to do all those things and do it well then it's bound to be a better tool than not having that."

Dyche believes Burnley do not always get sufficient credit for the things they do well, and Boyd personifies that dependable but unspectacular caricature, but he is sure that a strong work ethic is useful at every level of the game.

Antonio's Conte's got them (Chelsea) fitter, (Mauricio) Pochettino over the last few years has been getting them (Tottenham) fitter.

"They're some of the top boys in the market and they're getting them fitter."

Another player who has bought into Dyche's philosophy on conditioning is goalkeeper Tom Heaton.

He may not cover much ground during a typical 90 minutes but he has looked after himself well enough to ensure he has played 137 matches in a row since his Clarets debut.

That run could come to an end at St Mary's if he cannot beat the calf strain that ruled him out of England duty during the international break.

"He's an excellent professional and he buys into the culture and environment here," said Dyche.

"That helps to protect your body

It's not an exact science but my support staff do it well and Tom buys into that.

"His professionalism helps as well and to play that many games on the trot is an outstanding thing."

Veteran stopper Paul Robinson is standing by should Heaton not make it.