Burnley stunned Tottenham in the Premier League as Sean Dyche's side produced a resolute performance to claim a 2-1 victory at Turf Moor on Saturday.

After a largely uneventful first half in which both sides struggled to create chances, Burnley stunned Tottenham as Chris Wood headed home from a Dwight McNeil corner just before the hour mark.

​Spurs needed less than ten minutes to find a response as the returning ​Harry Kane raced clear of ​Burnley's defence to fire home into the bottom corner to draw the visitors level.

The game seemed to be drifting in the latter stages before Burnley stunned the visitors once more, as Ashley Barnes latched onto a scuffed ball across the box from Johann Gudmundsson to fire the home side ahead once more with less than ten minutes remaining.

Burnley's rugged determination to play their way gives Sean Dyche's side one of the strongest identities in the Premier League, and the visit of Tottenham proved to be just another day at the office for the Clarets as they dug in deep once more to make life difficult for the opposition.

Dyche's men showed relentless energy and desire once more in midfield to close Spurs down when they had the ball in central areas, limiting the creative scope of the likes of Christian Eriksen, whilst the Clarets' backline stood firm to block everything that came their way.

Wow! How important will that goal be? Ashley Barnes pops up in the perfect poacher's position to convert from close range!#BURTOT

Spurs may have breezed past European heavyweights Borussia Dortmund at Wembley recently, but a trip to Turf Moor was always going to prove a very different kind of affair for Mauricio Pochettino's side, and Burnley stayed true to their industrious game to good effect. 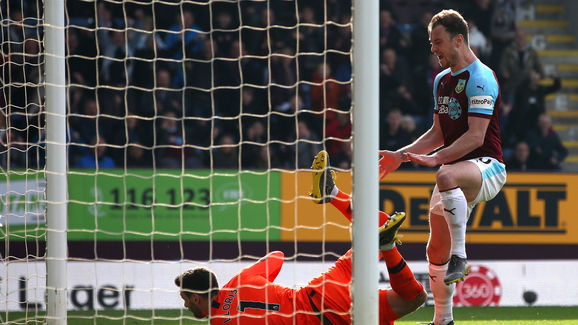 STAR MAN - Burnley's game is very much based on the collective effort of the team rather than individual quality, but it's the continuity of heroics from goalkeeper Tom Heaton that continue to inspire Burnley to success of late.

The England international has fought his way back to reclaim the number one spot ahead of Joe Hart in recent weeks, and Heaton produced another telling display between the posts to inspire his side once more on Saturday.

Tom Heaton is twice the keeper Pickford is

A fine save to deny a strong effort from Kane kept Burnley level and preceded the Clarets going on to take the lead, and there was little Heaton could have done to stop the Spurs striker's equaliser.

Tottenham have made a habit of winning the hard way of late, grinding out results in tough circumstances amid a flurry of recent injuries. Harry Kane's return for Mauricio Pochettino's side grabbed most of the headlines ahead of the game, but an away match against Burnley was always likely to promise more of the same for Spurs.

The Clarets were typically dogged and industrious in their work rate and desire to make things difficult for a more technical Tottenham side, sitting deep and forcing the visitors to utilise all the quality at their disposal to break down Sean Dyche's side.

#BurnleyFC #Tottenham is a snooze-fest.

Kane struggled to get into the game as Burnley defended with resolve and commitment, largely containing Spurs' technical superiority, as Pochettino's side struggled to find a real foothold in the game. 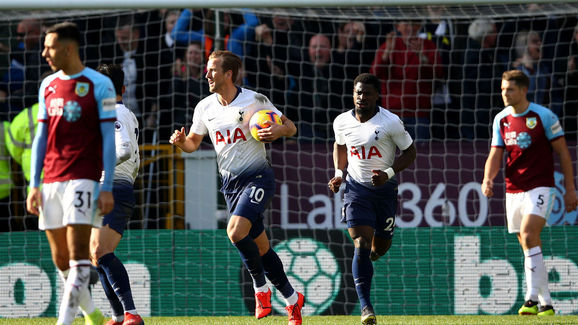 STAR MAN - With Tottenham struggling to find their usual technical level and fluidity in the game against a stern Burnley side, Harry Kane's potency in front of goal was always going to prove to be Spurs' biggest threat to the home side's goal if they could get the ball to the striker in dangerous areas.

Tough to see Burnley’s defense - so buttoned up all game - get undone by a throw-in drill assist. #Tottenham #Burnley #BURTOT

That is a super super goal.
Welcome back #HarryKane #BURTOT

Pochettino's side lacked productivity in their play for much of the opening hour but responded strongly to Burnley taking a surprise lead, and it was Kane who stepped up on his return to the side to force the issue and draw the visitors level.

Burnley take on travel to St James' Park to take on ​Newcastle next time out in the Premier League on Tuesday, before hosting ​Crystal Palace at Turf Moor next Saturday.

FULL-TIME: Burnley take the points on a disappointing afternoon at Turf Moor. pic.twitter.com/52u56tEt3c

Meanwhile, two huge London derbies lie in waiting for Tottenham in the next week. Mauricio Pochettino's side face ​Chelsea at Stamford Bridge on Wednesday, before hosting arch rivals ​Arsenal at Wembley next Saturday.