Brighton were denied victory in the dying embers of their clash with Burnley as Jeff Hendrick drilled home a stoppage-time equaliser for the Clarets to steal a 1-1 draw on the south coast.

The Seagulls nearly shot themselves in the foot during the opening stages of the contest when Shane Duffy's attempted clearance clattered straight into centre-back partner Adam Webster, with the ball looping inches over the Brighton net.

Graham Potter's recruits were fortunate soon after as Jack Cork drilled across the face of goal, the ball narrowly missing Ashley Barnes, who wouldn't have been able to miss from point-blank range.

As the game became increasingly tight, the two teams began to sit off and protect their clean-sheets. However, a snapshot from Glenn Murray snapshot almost broke the deadlock as half-time loomed, ​Burnley 'keeper Nick Pope reacting well to tip his low effort round the post.

Neal Maupay was the man to finally open the scoring, the Frenchman swivelling to send a Solly March delivery bouncing into the bottom corner and give ​Brighton the lead. 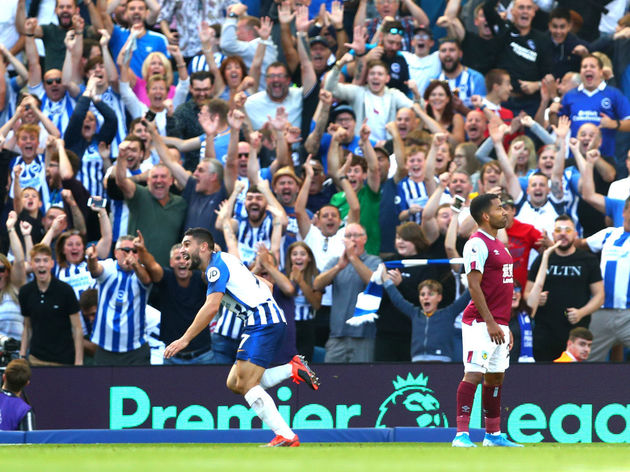 Chris Wood came close to grabbing a leveller on the hour, but could not redirect a stinging shot from Barnes back on target.

However, the Clarets were saved at the death by midfielder Hendrick, who rifled a 20-yard shot attempt beyond a helpless Mat Ryan to ensure the points were shared.