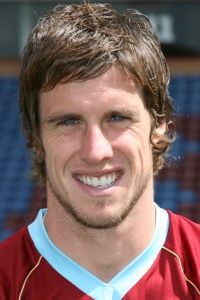 Ex-Claret Gray signed a one year deal at Elland Road back in January when it looked odds on he was returning to Bradford City, but is return to his first club Leeds has not been a successful one and he's played only eight times in the league, scoring once against Hull, with all eight appearances from the bench.

With that in mind, Leeds have released him from his contract to enable him to return to the Bradford & Bingley Pulse Flamingo Land Pension Fund Intersonic Coral Windows Valley Parade Stadium on a contract until the end of the 2013/14 season.

That's where Gray's career as a goalscorer started having played in wide positions for previous clubs. He scored 20 league goals in his first spell at Bradford City, scoring in both games against Burnley in the 2002/03 season including the infamous match when they equalised in stoppage time having been reduced to nine men.

Manager Phil Parkinson said of the new signing. "I'm delighted to have brought Andy into the football club. We've tried to sign him before in the summer, and we're really pleased we have him here now.

"It will be good for the lads to see a fresh face around the training ground. Andy will bring a lot to the squad and help support the current strikers we have here already. James Hanson, Nahki Wells and Alan Connell have been doing most of the work up top for us this season and we just felt that we needed someone extra up there to help them out.

"Andy's attributes as a striker ensures he will bring a lot to the table and I'm sure he'll make a great addition."

Gray will not be available for the Bantams' Capital One Cup semi-final 2nd leg at Aston Villa having played in the competition earlier in the season for Leeds.