Burnley sealed a 3-1 victory over Bournemouth at the Vitality Stadium on Saturday, as Sean Dyche's side earned three crucial points towards their survival bid in the Premier League.

It was Bournemouth who surged into an early lead after just four minutes. David Brooks delivered a free kick into the area and Ashley Barnes attempted to clear ahead of Nathan Ake who was waiting to pounce, but the Burnley man only managed to turn the ball into his own net in unfortunate fashion.

Goals from Wood, Westwood and Barnes hand the Clarets a huge win#BOUBUR pic.twitter.com/mUo8sRi0r0

​Burnley capitalised on a set piece of their own to draw level after 18 minutes. Ashley Westwood whipped in a dangerous free kick from the left flank and Asmir Begovic looked favourite to win the ball, but the goalkeeper got caught under the flight of the ball, leaving Chris Wood free at the back post to head home the equaliser.

The visitors continued to ramp up a frantic start to the game as Burnley turned the tables to take the lead just two minutes after going level. Dwight McNeil got down the side of ​Bournemouth's defence on the left wing before cutting the ball back into the area. Chris Mepham's poor clearance fell at the feet of Westwood, who produced a smart finish to side-foot the ball home.

Burnley capitalised on poor defending from the home side once more to double their lead before the hour mark. Asmir Begovic spilled a cross at the feet of Wood, who fed Barnes to fire Burnley's third with an embarrassment of ease, sending Burnley on course to a deserved victory.

Here's our breakdown of this one.

In what was a game between two sides with two contrasting styles of play, Bournemouth struggled to break down Burnley's tight defensive unit with their passing moves and technically superior build-up play.

Much of the Cherries' attacking threat often comes from their pace in the wide areas, but both Ryan Fraser and David Brooks struggled to create openings as Burnley's defence held firm and their powerful frontline caused Bournemouth's defence all kinds of problems.

Chris Mepham and Nathan Ake both struggled to cope with the physicality of Chris Wood and Ashley Barnes, whilst Nathaniel Clyne was substituted at half time after being run ragged by Dwight McNeil. Bournemouth's problems all stemmed from their own backline and gave them little chance going forward. 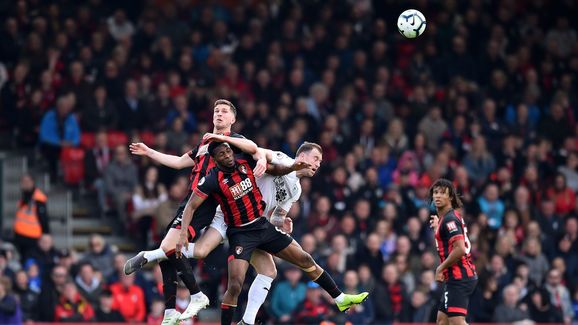 STAR MAN - Bournemouth were generally poor to a man on Saturday, with their defence in particular all over the place at the Vitality Stadium, and David Brooks was once again the brightest point in the Cherries' display.

The attacker has been one of Bournemouth's most consistent performers and one of the Premier League's brightest young stars this season, and the Wales international was the most positive performer again on Saturday, despite a lack of end product from his attacking efforts.

Despite their lowly position in the Premier League table this season, Burnley have once again displayed an ability to mix it with the best in the division throughout the campaign with their direct attacking approach and a solid defensive resolve.

The Clarets most recently earned a surprise 2-0 win over a high-flying ​Wolves side last time out, and once again took the game to the opposition, overpowering Eddie Howe's team who dominated possession but struggled to get the better of Burnley's industry and resolve.

2 - Ashley Barnes is the second player to score a goal and an own goal in a single Premier League match this season - it had happened just once in the previous two campaigns combined. Amends. #BOUBUR

Saturday's win earned Burnley three points which could be crucial in their bid to survive relegation this season and, based on yet another impressive display at the Vitality Stadium, Sean Dyche's side are good value for their place in the top flight. STAR MAN - Much of Burnley's style of play revolves around physicality, a stern defence and their direct attacking approach with the power of Chris Wood and Ashley Barnes in attack, but Dwight McNeil provides another dimension for Sean Dyche's side.

Nathaniel Clyne getting hooked at half time by Bournemouth while up against Dwight McNeil. Easy to see why some big clubs are keeping tabs on the Burnley youngster

The winger offers pace and strong, penetrating runs on the left flank, capable of opening up defences with individual ability, and his qualities were key to Burnley's second goal, giving Bournemouth a tough time and resulted in Nathaniel Clyne's substitution at half-time.

Bournemouth travel to the Amex Stadium to face south coast rivals ​Brighton in the Premier League next Saturday, whilst Burnley will host ​Cardiff at Turf Moor in a huge game in the battle for survival.