Big Chris back in the North West at Oldham 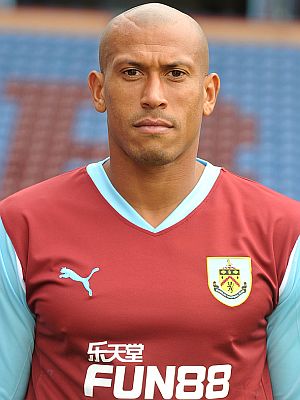 Iwelumo has signed for the Latics until the end of the season having fallen out of favour at Vicarage Road and having already spent one month away in a loan deal at  Notts County.

He started the season in the first team at Watford and made seven league appearances for them. He didn't find the net but did score the only goal of the game in their 1-0 Capital One Cup win against Wycombe ahead of the season.

In November, he moved to Notts County and played five times for them without scoring and his last league goals came when he bagged a brace in Watford's 2-0 win at Leeds at the end of March 2012.

Iwelumo spent the 2010/11 season at Turf Moor. By the turn of the year he'd reached double figures in the league but the goals dried up when Eddie Howe altered the style of play and he was picked up in a cut price deal by Watford, then under the management of Sean Dyche, ahead of the 2011/12 season.

Now 34, he's been signed by Paul Dickov as he looks to rescue his job after a run of only one point in eight games. Iwelumo is available for their FA Cup 5th round tie against Everton at Boundary Park.