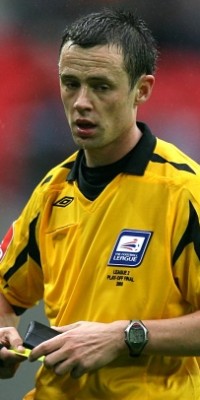 That night, we beat Portsmouth 2-1 to give Eddie Howe his first win as Burnley manager and Attwell had a decent enough game. He is, though, a referee who has courted so much bad publicity in his short career that most people are just waiting for his next major error.

Some have said controversy has followed him round but there have been so many occasions when he seemed to have gone looking for it.

Probably the most memorable of his gaffes was the awarding of a goal in the Watford v Reading game when the ball had gone nowhere near the net. He was dropped for that and a further axing game soon after when he turned a game between Derby and Nottingham Forest into pure farce with a series of outrageous decisions.

It's been never ending. He was accused of lying last season by Wigan boss Roberto Martinez whilst Steve Bruce, then at Sunderland, branded him a joke.

This season the sending off of Gary Cahill (then with Bolton) proved to be the final straw and he was demoted from the Select Group Referees and returned to duty outside of the Premier League with referees head Mike Riley hoping he'll be able to welcome him back at some time in the future.

His last Premier League game was that between West Brom and Everton on New Year's Day in a season when he's handed out 86 yellow and five red cards in 25 games.

Ten of those yellow cards came in one Europa League tie, a 3-3 draw between PSV Eindhoven and Hapoel Tel Aviv, all the other games have been in domestic football.