Ashley Barnes ready to finish the season on a high 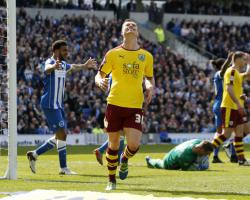 The striker made his first appearance since suffering a cruciate injury last May as a substitute in Saturday's 2-2 draw at former club Brighton.

Barnes, whose goals helped fire the Clarets to the Premier League in 2014, now hopes to play his part in another successful run-in starting at home to Cardiff on Tuesday night.

"It was brilliant to be back and I got a good reception from the home and away fans," he told Burnley's official website.

"It's gone quick to be fair

"It's for us to keep pushing on now and nicking those points along the and hopefully we can replicate the last promotion season and do it again.

Burnley have opened up a three-point gap at the top with Middlesbrough, in second, hosting Huddersfield

Boss Aitor Karanka believes his side's experience last season, when they were beaten in the play-off final by Norwich, will stand them in good stead this time around

"We need to forget who the opponent is because we need to win every one," the Spaniard said at his pre-match press conference

"The experience is always important

"Sam will miss out," Hughton told the Argus

"It's a very slight hamstring, certainly not a bad one

We hope he won't miss too many games

"Bobby is not available

As always with Bobby, we get him through training and the weeks

He's just a little bit sorer than normal, so he'll miss out."

Fourth-placed Hull head to Derby in sixth while Sheffield Wednesday, who sit between them in fifth, host Blackburn.

At the other end of the table basement side Bolton, who are 15 points from safety, travel to Brentford, Charlton entertain Ipswich and MK Dons welcome Wolves.