​The Premier League has been the stage for numerous forward-pairings to strut their stuff over the years, but the idea of playing two men up top is now slightly outdated.

Look at the clubs currently fighting it out in the first division and you'll see only a handful regularly use a formation that includes a couple of strikers. Of that select group of teams, Burnley may well have the deadliest duo. Chris Wood and Ashley Barnes - two names that should strike fear into the hearts of top-flight defenders after their impressive starts to the 2019/20 campaign.

The frontmen have collected six ​Premier League goals between them this term - four for Barnes and two for Wood - meaning they're well on their way to beating their joint-tally of 22 the season prior. Moreover, both players now feature in the competition's top 15 goalscorers this year.

On the face of it, that's a solid performance, but nothing to suggest they're the league's finest attacking partnership. However, it's important to remember which side they represent.

Goals are not the ​Clarets' forte and they would be the first to admit that. Last season, their were just five clubs who scored less than Sean Dyche's recruits: the four teams at the bottom and Rafa Benitez's defensively-minded ​Newcastle United. Go back one year more and you have a similar scenario. Once again, only five of their rivals were less prolific and, once again, they were all involved in a relegation battle. The fact Burnley came seventh that campaign tells you all you need to know about their game-plan.

So, what does it all mean? It means Wood and Barnes are capable of punishing opponents, even when their service is limited and scoring chances come infrequently.

Surely, we are to judge a goalscorer's worth by how well they utilise opportunities that come their way, rather than purely on the total they reach. With that set of criteria, it's difficult to claim Barnes is not one the competition's most accomplished finishers.

In terms of expected goals versus actual goals, there are just four players in the top 15 scorers with a better ratio: Pierre-Emerick Aubameyang, Tammy Abraham, Jamie Vardy and Teemu Pukki. That's two individuals from a 'Big Six' club, one from the side currently third in the table and another who has been the breakout start of the season. It's not bad company for Barnes to keep.

The Austrian Under-20 international is clearly an accomplished goalscorer, but that isn't enough to say that he and Wood are the league's best...or is it?

Why is Barnes so effective at present? Because he has the perfect foil for his style of play, a fellow six-foot-plus target man who bullies opposition defenders until they can no longer take it. Significantly, the same is true from Wood's perspective.

It's exhausting for backlines to cope with two big, bustling forwards, each man keeping several players occupied. When that occurs, spaces are bound to open up and at least one of the strikers will profit.

The fact that Wood was only two goals behind Barnes last term shows that he, too, poses a very real threat. Over the course of an entire campaign, he won't be far behind his partner. 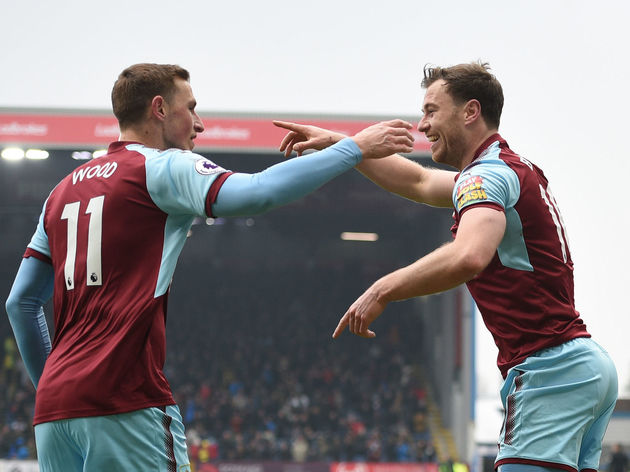 However, they may not be as integral to their sides' success as the Clarets duo. Another type of forward wouldn't work for the club, which is demonstrated by Matej Vydra's woeful goal record for the Lancastrians.

Burnley need players like Wood and Barnes to make the most of their limited resources. A long-ball, highly-physical approach to football would be useless if the strikers couldn't hold the ball up and dominate in the air.

They may not be the Premier League's greatest front pairing outright, but they certainly are the most suited to Dyche's masterplan, with their telepathic understanding and domineering style yielding results for the Clarets coach.