Arrangements for supporters for Blackburn game

Both clubs have worked closely with police to ensure that the game (kick-off 12.30pm) goes ahead with the minimum of incident.

Blackburn supporters, who have been allocated an initial 3,080 tickets, will be transported to Turf Moor on coaches and taken to a point adjacent to the turnstiles for the away end and from there guided immediately into the stadium.

After the match when they leave, an area of Harry Potts Way, which will be cordoned off, and Belvedere Road will be out of bounds for home supporters on foot.

Those fans affected will have to take an alternative route from the home area turnstiles, via the arrowed routes shown below.

Before the game, the first coaches from Blackburn will arrive at 10.45am so home supporters and guests using the car park in Harry Potts Way are encouraged to arrive early.

That car park, and the main Turf Moor car park, will remain closed for an hour after the match finishes.

The bar in the Foundation Lounge in the Jimmy McIlroy Stand will remain open to all home supporters after the match.

Supporters are also encouraged to use town centre car parks to avoid congestion around Turf Moor with local authority car parks free for use on a Sunday.

Meanwhile, all supporters are asked to arrive early with Turf Moor expecting its biggest crowd of the season. Turnstiles will open at 11am.

Burnley Football Club hopes these arrangements will not adversely affect your enjoyment of the day and we apologise for any inconvenience caused. 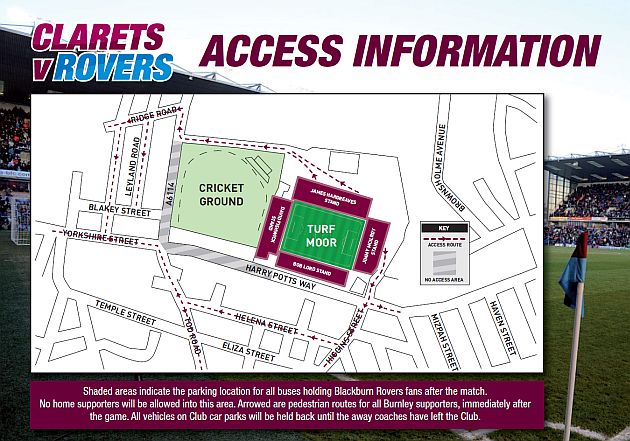