Burnley's Andre Gray has been named the Sky Bet Championship Player of the Year at The Football League Awards 2016, following a vote among club managers. 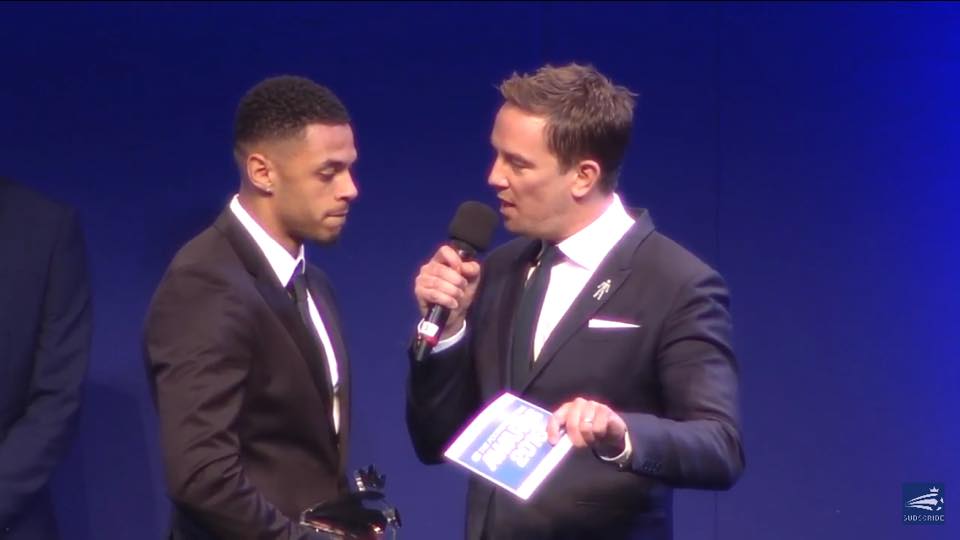 Andre Gray received the award at the gala ceremony at Manchester Central on Sunday evening in front of over 600 guests from clubs, sponsors and the football industry.

The Football League Awards 2016 was being hosted in Manchester for the first time, the same city in which The Football League was officially formed 128 years ago to the day. In its 11th year, the awards ceremony celebrates on and off pitch excellence across The League’s 72 clubs.

Andre Gray beat stiff competition from Brentford’s Alan Judge and Fulham’s Ross McCormack to claim the overall Sky Bet Championship Player of the Year Award. It was a night of celebration for the 24-year-old as he was also named in The Football Manager Team of the Season, comprised of players from The Football League’s three divisions.

The striker has been central to the Clarets’ promotion push. In his first season at Turf Moor, Gray has bagged 22 goals in 37 games for the Clarets. He also netted twice for Brentford in August to put him top of the Sky Bet Championship goalscorer charts with a total of 24 goals.
After winning the award, Gray said: “I’m over the moon with it. To even get nominated was a massive honour for me, but to win it is even better.”

The Sky Bet Player of the Year awards where voted for by managers of the clubs in each division. Each manager was asked to list their top five players from this season in order, with the scores added up to get a shortlist and an overall winner.

Shaun Harvey, Chief Executive of The Football League, said: "During another action-packed Football League season it is important to acknowledge outstanding performances, both on and off the pitch.

“We’re delighted to recognise this special group of nominees who have shown exceptional levels of talent, dedication and achievement. Congratulations to everyone who was nominated and particularly our winners, all of whom are deserving of their accolade.”

To find out more about The Football League Awards, and for a full list of award winners, visit www.FLAwards.com or search #FLAwards on Twitter.
Congratulations Andre from everyone at Clarets Mad. I hope we can replicate the same end result from the last time a Burnley player won this coveted award. Anyone remember Danny Ings and the Clarets last promotion campaign? (TEC).