A Must Not Lose Game at St James Park 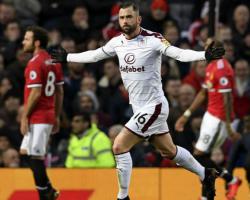 High flying Burnley are currently on a horrible run of form, gaining only two points from a possible eighteen, Benitez's Toon are hurtling inexorably into the dreaded relegation drop zone

Quite simply, neither manager can afford to lose tomorrow night's crucial encounter in the north east of England.

Add into the mix transfer deadline day and the game takes on epic proportions., Burnley are looking desperately to add a centre half to their depleted ranks

Nothing coming out of Turf Moor suggests that a move for Barnes is likely, but on transfer deadline day just about anything can happen and something usually does!

The Clarets will travel to Newcastle without England shot stopper Tom Heaton and Eire's Robbie Brady, both victims of long term injuries.ÃÂ

Belgium international Steven Defour, a virtual ever present for the Clarets this season is ruled out with a knee injury and Burnley's player of the season James Tarkowski also looks set to miss the Toon clash

Dyche may be tempted to take the game to a Newcastle United team who are finding home wins difficult to come by; not winning at home since a narrow 1-0 home victory against Crystal Palace in late October

Burnley's new signing, wily, wizard winger Aaron Lennon might just find himself thrust into service in the hope of helping to secure a much needed win for Sean Dyche's Clarets.

On the reverse side of the coin, Benitez will want to reverse the 1-0 defeat Newcastle United suffered in the last encounter at Turf Moor

However, given the need for points for quite different reasons, it might not go beyond the realms of possibility that both managers decide to park the bus at St

James' Park and decide to settle for a point each