It was sixty years ago today 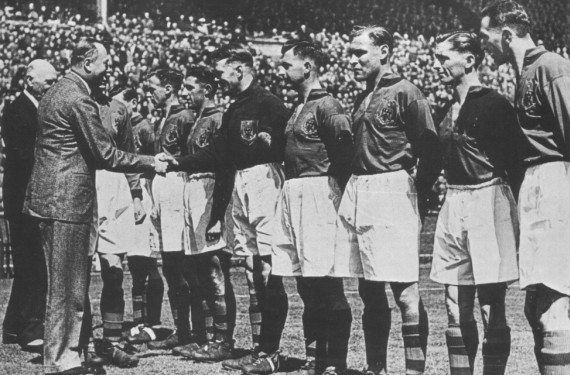 We were having a good season, the first season following the resumption of football following World War II, and as we prepared for our first ever visit to the Empire Stadium at Wembley we sat in second place in the Second Division. Our opponents Charlton Athletic were in the First Division, and a draw at home to Arsenal in the previous week had left them nineteenth but well clear of the relegation positions.

That first post-war season had been a difficult one, because of the worst winter in living memory. So many games were called off that despite this being the Cup Final we still had another seven league games to play and wouldn't complete our fixtures until June.

To reach Wembley we had beaten Aston Villa, Coventry, Luton and Middlesbrough before facing Liverpool in the semi-final. A 0-0 draw at Ewood Park of all grounds was followed by a replay at Maine Road and a Ray Harrison goal was enough. Charlton meanwhile had beaten Rochdale, West Brom, Blackburn, Preston and then Newcastle in the semi-final at Elland Road.

In 1962 we were to play Spurs in a final that is still remembered to this day, a final full of good football, but in 1947 we were unable to give the watching television audience, or the big crowd at Wembley, much excitement in a match that was described as drab.

Our best chances fell to Peter Kippax. He was probably the most popular player in the Burnley side but he had a disappointing afternoon. Billy Morris missed a good chance whilst at the other end we were thankful to full back Arthur Woodruff for clearing off the line.

The only player who came closest to breaking the deadlock was inside-forward Harry Potts but his twenty yard screamer crashed against the bar with Sam Bartram beaten and that meant the game went into extra time.

Burnley came strong in extra time and if anyone was going to win it then it looked as though we would. Then, with just six minutes of the extra thirty remaining Charlton got the winner. A cross was headed down for Chris Duffy and he made no mistake with a shot into the roof of the net. Even then we twice came close to an equaliser. Morris headed over and in the next attack Harrison was fouled but claims for a penalty were waved away.

It wasn't to be, but those seven league games later we had the real prize, a place back in the First Division. Sadly, sixty years on, none of the Burnley players are with us to celebrate the day. Billy Morris was the last to pass away on New Year's Eve 2002. Both George Bray and Jack Chew had also died during the same year.

This was the team that set Burnley on the road to a long stay in the First Division, and that Championship thirteen years later. They won us promotion as well as taking us to our first ever Wembley final.

The picture with this article shows the Burnley players being introduced to the Duke of Gloucester ahead of the game.