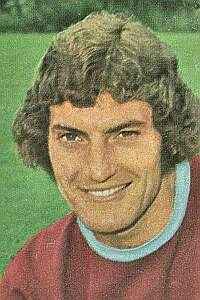 Within days of that announcement Burnley Chairman Bob Lord agreed to sell Martin Dobson to Everton for a sum of £300,000. It was a decision that aroused plenty of controversy at the time and almost 30 years later it can still form the subject of heated debate amongst Clarets fans.

To put the period in context the Clarets had finished the previous season in 6th position just one win away from a place in Europe and had reached the semi-finals of the FA Cup. The 26 year old Dobson was the club captain with over 40 goals from midfield in his 220 appearances and had been capped 4 times for England over the summer. Burnley had a team full of youthful promise and had just constructed the most modern stand in the country. What could go wrong?

The season started with a disappointing 2-1 defeat at home to Wolves and the following Tuesday the Club held it’s annual staff dinner at Mitton Hall. During the post-meal speeches board member Dr Iven announced that the new stand on Brunshaw Road would be called ‘The Bob Lord Stand’.

It is difficult to believe that Lord new nothing of the plans and hadn’t been involved in the decision but all the same he was reported as commenting: "This came as a complete surprise to me. It was all decided without my knowledge and I must say it makes me extremely proud."

The day following the meal the Clarets travelled to London to play Chelsea and secured a 3-3 draw courtesy of goals from Dobson, Hankin and Fletcher but then slumped to a 2-0 defeat at Ipswich on the Saturday.

It was a poor start to a season that had promised much but little did they know that Dobson’s goal at Chelsea was to be his last for the club for over five years. Burnley’s 4th game in 10 days was a return against Chelsea on the Tuesday at Turf Moor but as Clarets fans reached for that day’s Burnley Express on the doormat they were rudely awakened with front-page banner headlines stating ‘CLARETS SET TO SELL’. 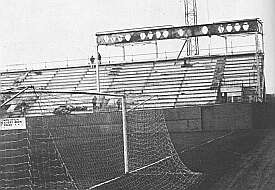 To say that this stirred up public opinion would be an understatement. Everyone was having their say and it didn’t take the fans too long to link the sale of Dobson to the building of the new stand. In fact it took only 2 days before someone suggested in the letters pages of the Burnley Express that "It would only be right to name the new stand 'The Martin Dobson Stand'."

Other comments included 'If Burnley FC isn’t careful the stand could become the most expensive tombstone since the pyramids. It would appear that the directors do not wish to build a successful side merely one to make the numbers up in the league' and the uncannily prophetic 'Do we want a successful side or the best ground in the Fourth Division?' which I'm sure the writer could never have actually envisaged when he wrote it.

There were other points of view such as the fan who said 'I don’t blame Bob Lord or the management, it’s the people round here who don’t support the team. If only they would turn up regularly then we wouldn’t have to sell our best players.'

For his part Bob Lord said that it was “Sheer rubbish to blame the stand…we are not talking about just an ordinary fee, this is a British record. If someone came in with an offer of £250,000 for Dobson we would have turned it down but we could not afford to turn down £300,000.”

In fact the transfer of Dobson was not a British record as Everton had already paid Birmingham City £350,000 for the services of Bob Latchford a few months earlier but either way the move was still a bombshell for Clarets fans.

In the immediate future the move didn’t seem to do the Clarets too much harm with 7 of the next 10 matches being won but then it was time for Dobson to appear at Turf Moor again only this time wearing an Everton shirt. For the occasion Bob Lord allowed the TV cameras back inside Turf Moor for the first time in 2 years.

The match was drawn 1-1 with Ray Hankin heading the Clarets equaliser past Dai Davies shortly before half time but further controversy raged over Dobson’s behaviour when celebrating Everton’s opener from Jones only 3 minutes earlier. On his return Dobson had been greeted politely rather than warmly but photographs from the time show him running to the Burnley supporters in the Cricket Filed with his arms aloft very much like he had just scored for Burnley! 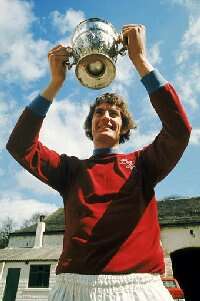 He was accused of ‘insulting the crowd’ by Bob Lord after some spectators said he had sworn and made a V sign towards them. Dobson admitted to ‘losing control’ and accepted that he might have sworn but denied making any offensive gestures and certainly the photographs show him with fists clenched. He said it was not his intention to upset people but apologised if he had done so. It seemed that he was feeling under great pressure after failing to score in his first 10 games for Everton and his reaction indicated that he was getting at least a bit of stick from the crowd.

Although the hullabaloo over that particular game has long since died down the controversy over the sale of Dobson still rumbles on.

After flattering to deceive in the early part of 1975 when the Clarets actually went 2nd in the table behind Everton in early March we were destined to win only 10 further games as a top flight side including the whole of the following season which ended in relegation.

Opponents of Lord’s decision to sell Dobson point out that as part of a sell to survive policy it was spectacularly unsuccessful and that it was more important for the finances of our club to ensure First Division survival by holding onto our best players, especially the club captain. For some the decision was a watershed when an already fragile trust between supporters and Chairman was broken forever. It highlighted the fact that despite his achievements he had failed to keep pace with a rapidly changing game and marked the start of and hastened our decline as a football team.

On the other side of the coin, £300,000 was an awful lot of money to turn down. There is no doubt that we needed a new stand and that it left Turf Moor as one of the most modern grounds in the country, a legacy that would last for years to come. Given the way the game was going we would have been relegated anyway sooner rather than later and that it was better for Lord to leave us with bricks and mortar rather than the ephemeral talents of one player.

You can make your own minds up about the relative merits of the sale but for Bob Lord, providing a stadium for the spectators was one thing but pandering to their sensitivities was another. His decision to sell our best player only a matter of days after christening the new stand in his own name meant that for years to come the supporters would have their own name for it. A legacy that I'm sure he never imagined at the time.