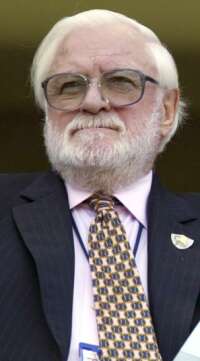 That only serves as a reminder of early 1965 when Burnley Chairman Bob Lord was keeping those at arm’s length who he thought could be a threat.

It all started just before Christmas 1964 when the Burnley Board received a request to transfer 100 shares from a Mr. Luther Wilkinson to a Mr. Eric Cookson. Both were well known in the town, Luther Wilkinson was in fact the father-in-law of former Claret Jimmy McIlroy whilst Cookson was described as a construction company chief.

The company was Howarth’s Builders who were situated in a new building in Trafalgar Street, Burnley, a building that later occupied the Stephen Backhouse Group and is now Greenhalgh’s Vets.

Shares, as now, were £1 shares and Wilkinson wanted to sell his 100 to Cookson for £5 each. For whatever reason, and he would have certainly assumed something sinister, Lord refused the transfer. Lord was not a friend of Cookson, he made that clear, and would not have been happy had he had such a shareholding even though it was minimal and would have given him no power at the club.

That was the end of the matter and after something amounting to sharp criticism Cookson accepted that he was not to get the shares. A month later though Wilkinson again attempted to sell his shares, this time to a 33-year-old company director and lifelong Burnley supporter from Brinscall, Chorley by the name of Kenneth Bates.

Now one thing everyone knew was that when Bob Lord said NO he meant NO and to try it on it this way would do nothing other than upset the Burnley Chairman beyond belief. And when upset he let everyone know about it.

So angrily he refused the share transfer to Bates but unlike Cookson Bates wasn’t ready to go just as quietly. The Brinscall based Claret was having none of it.

"I deeply resent the decision not to allow this transfer," said Bates. "I have written to the board demanding an explanation and if I don’t get a satisfactory answer, I will regard this as an unwarranted slight on my character and take the matter further."

Mr. Bates did stress that he was not making any attempt to get onto the board but merely wanted to help the club to the extent of putting some money into it. He did say though that the board’s action alienated the sympathy and support of yet another person at a time when the club needed all the help it could get.

"It’s a disgrace that a public company can restrict its share transfer," he added. "This matter might well be examined by The Football League and Football Association with a view to amending their rules, and, from the company viewpoint, it may be necessary to make representation to the Board of Trade."

"We must emphasise that the articles of association of Burnley Football and Athletic Company Limited clearly state that the directors may refuse to register any share transfer without giving a reason.

"As for the hint about putting money into the club, that’s very nice, but we are ok, thanks very much."

That, as they say, was an end to it and Mr. Kenneth Bates was never heard of again in respect to shares and Burnley Football Club. In fact some short time later he acquired shares in Oldham Athletic, took over as Chairman and appointed Luther Wilkinson’s son-in-law, Jimmy McIlroy, as manager.

After a short time Bates disappeared from football but returned some years later to take over Wigan Athletic before moving on and buying Chelsea for £1 in 1982. Yes, the Chairman of Chelsea Football Club of the past number of years is a lifelong Claret from Brinscall, Chorley.

But did Bob Lord do the right thing or not keeping him out at Turf Moor?

This article was originally published in January 2004.

In January 2005, Ken Bates purchased a 50% share in Leeds United. They subsequently went into administration in 2007 but, in May 2011, Bates was confirmed as the club's new owner.