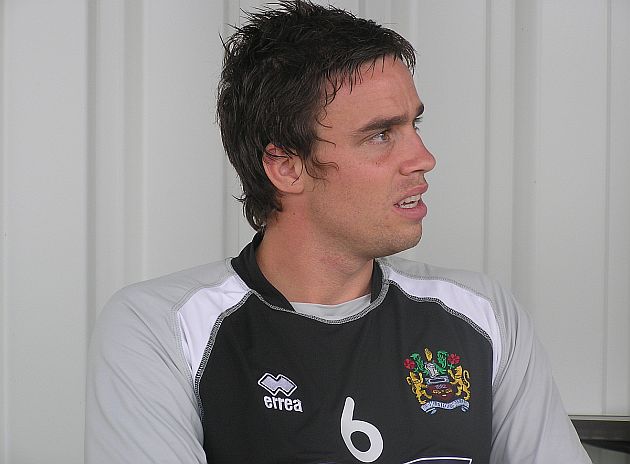 The article, entitled Three hundred not out for the calculated risk, covered his Burnley career from the summer of 2004, when he was signed by new manager Steve Cotterill from Cheltenham, right through to that day and that 300th appearance.

It was a remarkable milestone for a player who, in his time at Turf Moor, had fought back from a ruptured anterior cruciate ligament in 2007 and then found himself, under managers Owen Coyle and Eddie Howe, not being first choice in the team.

His time at Burnley can be split almost equally in two. In the first half he played mainly as a right back, although he did once partner Kyle Lafferty up front against Reading (we lost 3-0). He played at right back in the play-off final at Wembley but since has played exclusively in the centre of defence, the position Cotterill once told me he would make his own.

When he reached that 300 back at the end of September last year, I remember looking to see if he could make it to 300 league appearances before the end of the season. The answer was no; if he played them all he would get to 298, and with the red card at Huddersfield bringing a one match ban his total was 297 when we came off the pitch at Reading at the end of last season.

For some reason his was the name on the team sheet most fans believed would disappear first when we kicked off in the Premier League. But it's not been the case. Not only has he been in the team but he's already given us three more outstanding performances with the very appropriate clean sheet against Manchester United last Saturday coming on the occasion of his 300th league appearance for Burnley.

That's some achievement in today's football, particularly for a player who was 26 when he arrived at Turf Moor having never played higher than League One.

At Burnley it is not just in today's football that it is an achievement; it's not something that has happened to too many Burnley players over the years. In the entire history of the club he becomes only the 20th player to have played in 300 league games for us, and all of the other 19 were younger than Duff when they made their debuts.

Congratulations Duffo and welcome to the top twenty.