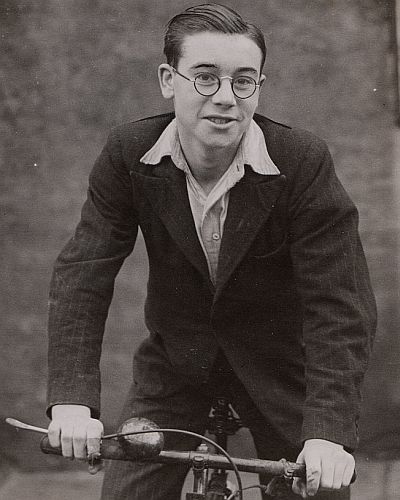 With a headline of He has cycled the country to follow his team, it started: "If you happen to be on your way by motor coach to support Burnley F.C. and you pass a young lone cyclist not wearing an overcoat but sporting a big claret and blue rosette, it will probably be 15-year-old Eric Cock, of 51, Gordon Street."

The article continued: "I was about to write that you would only see Eric if the match was a reasonable distance away, but it would be difficult to define the word" reasonable" where this devotee is concerned.

"Would you place Grimsby in that category? Eric and a pal went there in November to follow the Clarets. They left Burnley at 7-30 on the Friday night and they had to finish the journey by bus owing to fog and lightning trouble.

"He went to Luton last winter when the snow was on the ground. Remember? Some of the Town supporters proceeded to snowball him when they saw his rosette. But this is a minor discomfort to such a zealot who puts up with worse ordeals which pale into insignificance if he can see his team win, and his philosophy is, "If we get beaten we've had it, so why grumble?" Other supporters please note!"

Eric once had to walk home from Todmorden on his way back from Sheffield because of a pea souper fog and was twice drenched in successive games as he cycled in pouring rain. If he couldn't get there and back between his working hours, he simply took the motor coach.

Had this been nothing more than a story of a young boy, in early post-war England, taking every opportunity to see his team play, then I'd have been fascinated by it and would almost certainly have written an article about such a dedicated fan.

But my ears pricked up at the name Eric Cock, because an old friend of mine had that name. The Eric I knew, I suddenly realised, would have been around the age of 15 in early 1948, but surely this wasn't the same person.

It certainly was and I shouldn't have been surprised because for years and years he was a fanatical supporter of Burnley, both the football club and the cricket club next door. Such was his dedication to the cricket that he would take his family to Morecambe for their annual holiday and then drive straight back for the Lancs League game that afternoon before returning to Morecambe.

At the time of the article, he had started his working life as a shuttle-peg maker, but he spent many years working in different parts of the country, often travelling miles each day. He proved to be useful company on away trips because his working life had enabled him to know exactly where to find the best pubs, fish and chip shops and, when caught short, the nearest public conveniences.

I was more fascinated by this story because the Eric I knew, and he would probably have been in his mid-30s when I first met him, was not the most athletic of men I would have to say if I was being kind. The thought of him cycling from one end of the street to the other was not something I could have imagined let alone to Grimsby or Luton. 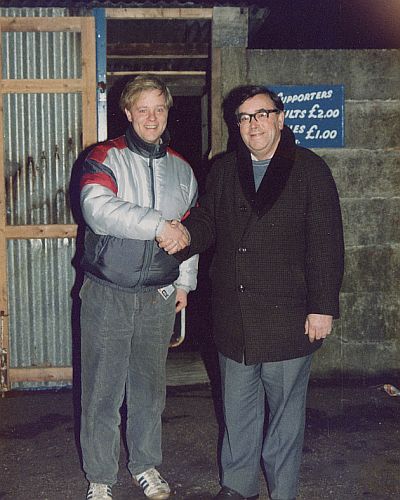 But he was damn good company. I spent hours travelling up and down the country with him over the years and I recall one trip in 1973 to East Fife in the Anglo Scottish Cup. He was working in the Gateshead area and we travelled that way to pick him up on the way. I'm not sure I'd want to do that journey again in a single day.

There's a sadness to the story. Eric began to suffer ill health in the last few years of the 1990s and passed away at the age of 68 in October 2000. There is no doubt, from reading this story, and from knowing Eric so well, that both Burnley FC and Burnley CC lost a damn good supporter.

He was always so positive about both clubs and never accepted defeat. If we were 3-0 down with ten minutes to go he'd still believe we could get something and once, at the cricket, his belief came true.

It was a Burnley v Rawtenstall game at Turf Moor with Burnley requiring 18 to win from the final over. Home bowler Terry Townend, who hadn't scored a run all season, was at the wicket and on strike. Eric calmly said: "We'll get these in the first three balls." Townend proceeded to hit the first three balls for six and the game was won. Eric just smiled, satisfied at seeing another victory.

We'd just been promoted to the second tier of English football back in 2000 when he left us. I'm certain he would have been absolutely delighted at what we've achieved since although I'm not so sure he'd have got on his bike again as we see in the first picture, taken at the time of the article.

The second picture shows Eric at Torquay in February 1986. Both he and the friend he's pictured with were completing their 92 grounds on a freezing cold night. I can confirm that Eric travelled by Supporters' Club coach.