A labour of love

That soap-opera seems now to belong to a different world, with those weekly, impromptu Saturday evening interviews between Gary Hickson and Ingleby during the Radio Lancashire phone-in. That is because it does: it was 1998. Tony Blair had only been in Downing Street a year. Chris Waddle had scarcely vacated the hot-seat at Turf Moor. 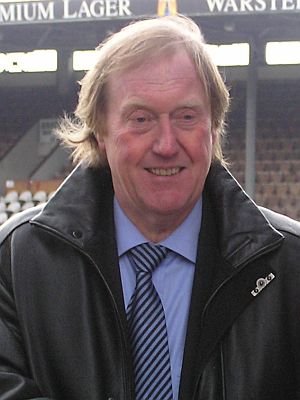 And Burnley Football club was on its back. Terracing had disappeared from Turf Moor just a couple of years earlier, and the cost of those two new stands was crippling the club. The likes of Colin Carr-Lawton and Phil Eastwood were being drafted into Stan Ternent’s first team because there was no-one else. Six and a half years after leaving the bottom division, we were in serious danger of going back there.

Under Barry Kilby’s careful guidance, we have travelled an awful long way since those inauspicious days.

I have been trying to write this piece for a couple of weeks, only for work commitments to intervene. But perhaps that is apt, because it neatly underlines the point I want to make – the really remarkable thing about Barry Kilby’s chairmanship.

Forget for a second the financial investment, which - irrespective of the occasional whispers to the contrary - will have been considerable. I'm talking about the time he has spent running, administering and representing a football club which is a glorious irrelevance in comparison to the most important things in life.

My mind goes back to the time in the autumn of 2009, when I spent a couple of hours sitting and talking with Barry, and Sonya, for a book which ultimately never quite happened. Both he and Sonya gave their time freely and willingly, as I gather they always have. But I will always remember that, in order to be there on a mid-week evening, their son Tom had to come along too, and he sat there for two or three hours, doing his homework in the corner of the chairman's lounge. As I left them, the family were off to get a belated dinner, and then no doubt Tom would be off home and to bed.

I don't know how often that happened, but I do remember Sonya saying that they frequently had to prevail on family and friends to help with the practicalities of family life in order to enable them to attend matches, meetings or functions for the club.

She certainly wasn't complaining, merely stating a fact. But that is the context in which the Kilby years must be viewed. All of us struggle to juggle the competing demands upon our time – work, family, friends, hobbies. And anyone who has ever been asked to help out at the kids’ football club, or the local community group, knows how difficult it is to find the time to add those commitments on top.

So take that commitment, and expand it until you are running a community enterprise with a turnover of at least £10 million quid, with around 20,000 members. And then imagine running it not for a couple of years, but for 13 years, or the whole of a child’s formative years if you prefer. That’s the scale of the voluntary commitment Kilby has made, along with his family.

Looking back now, over the chunk of my own life that his chairmanship spans, and it seems almost inconceivable that anyone could find so much time to give for so long. He was in his late 40s when he took over, so I suppose he would still have had a relatively young family. He must have had to make sacrifices at times; there must have been evenings on which he has honoured commitments to Burnley when he might have preferred to go home to that family.

But he has done so because he cares about the club as deeply as any fan.  He has watched Burnley since the 50s. He’s watched the club from every area of Turf Moor – he stood on the Cricket Field End, and became a Longsider. His dad was the scourge of Bob Lord: the man who once tried to set up a supporters club, only for Lord to shut it down.

And, when we got promoted in 2009, it was a source of pride that we’d done it with a man at the helm who was one of us; a genuine supporter following in a family tradition, with an accent and down-to-earth manner which mark him out as a proud son of East Lancashire.

He will be forever remembered, rightly, as the chairman who took Burnley to the Premier League, but his influence has run deeper than maintaining a first team which has been successful and serviceably competitive by turns. In that respect, it was highly appropriate that he should have announced his retirement in the week that the club’s youth team reached the quarter-finals of the FA youth cup for the first time in 34 years.

The youth system Kilby inherited wasn’t a very high priority, and it wasn’t very successful. Yet reinvigorating it seems to have been a personal priority, perhaps in part that is because he was himself once a part of it. And if Jay Rodriguez is ultimately sold this summer for the suggested £6 million pounds fee, then a certain portion of the credit must go to Barry Kilby. It reflects his desire to leave the club with a lasting legacy.

And that, perhaps, is the point. Some people buy into football clubs for the thrill of the crowd, to be adored. Others for a status symbol. I suspect that even Kilby’s greatest detractor would readily agree that neither of those allegations can be laid at his door. If there has been a criticism of him at times, it has been that he is too reluctant to seize the limelight and broadcast his vision.

Barry Kilby got involved simply because he had the chance to influence something he cared about deeply, to put something back into an institution that had been a part of his life just as it is a part of every other supporter’s. His motives were the same ones we perhaps like to believe would drive us, if ever we find ourselves in his position: to try and make his dreams come true whilst stewarding something he knows to be enormously precious – and which he has probably ultimately come to view as being enormously fragile.

For that reason, he has steered a careful course, always allowing his ambitions for the club to be constrained by a sense of duty. At times that has been frustrating, and most of us have disagreed with his reluctance to loosen the purse strings at one time or another, almost certainly naively. But because those motives are well understood, the disagreements have seemed to me akin to family squabbles: mild disagreements had in spite of mutual affection, rather than because of a gulf of distrust.

With hindsight, that autumn of 2009 was the high point of the Kilby years. The evening I mentioned earlier in this piece came in the week after Aston Villa had sneaked a point at Turf Moor, and I can remember Kilby wryly comparing the disappointment of a draw with Villa with what he had inherited. He was still wide-eyed in his enthusiasm for Owen Coyle, still entertained by the peculiar juxtaposition of old-school and new-wave owners he had encountered at Premier League meetings. He talked about Wembley, and told a story of bumping into Steven Caldwell and sharing a quiet moment at a motorway service station on the way home, with an animation that you sensed could have lasted all day. He – and Sonya – were, like all of us, simply enjoying the ride.

We all know what came next, and during the past two and a half years, he has begun to look like a man whose enthusiasm had been drained by the jarring return to reality which Coyle’s departure hastened. With hindsight, there may have been other factors in play, but there has been a growing sense that he might have had enough.

And so, ironically for a man who never did it to be adored, he leaves the job with the sort of very public affection which many chairmen crave but precious few achieve.  He can go back to being a fan, back to where he started from. But thanks Barry; thanks Sonya. Thanks to his children for letting their dad do it for so long. I hope his retirement is a long and happy one, and that he is able win his biggest battle. Because for the last 13 years, it’s been a real privilege to have him fighting those of Burnley Football Club.