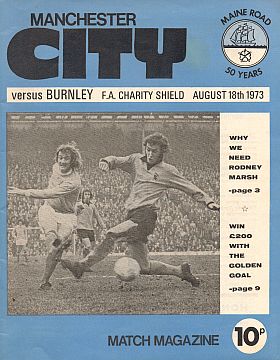 With neither League champions Liverpool nor FA Cup winners Sunderland wanting to take part, Burnley travelled to Maine Road to face Man City who had won the FA Charity Shield a year earlier.

Manager Jimmy Adamson had a dilemma ahead of the game. New signing Peter Noble had impressed in pre-season, and had started the two previous games in midfield when Geoff Nulty filled in for Keith Newton at left back.

Newton was declared fit, and with Mick Docherty, who had suffered a cartilage injury in the league game at  Huddersfield in the previous season, having come through the pre-season games unscathed, the manager opted to play those who had won the club promotion. That meant the full team from the previous season, Billy Ingham on the bench and no place at all for the new man from Swindon.

We were up against a team who had ended the previous season in eleventh place in the First Division and the national press were of the opinion that they would sweep Burnley aside and lift the shield for a second successive year.

But it was Burnley who won it, and in doing so they issued a warning to all the other 21 clubs in the First Division that they would be no pushovers in the coming season. For whatever else their 1-0 victory over Man City at Maine Road proved it confirmed that Burnley would be carrying qualities of character, resilience and that massive never-say-die spirit which had carried them to become Second Division champions.

At times it did seem as though the polished skills of City might tear Burnley apart. Often the Clarets were stretched to their limits, but they never surrendered. Certainly they were favoured by good fortune but more often than not it was resolute, determined defensive play that kept the home forwards at bay.

Over the whole match City, one of the classiest of teams in Division One, impressed as the more skilful of the two teams, but when Burnley attacked they showed enough fluency and penetration to worry the home defence, and that was an encouraging sign.

Furthermore, Burnley clinched victory with an excellent goal, from an imaginative, well rehearsed and perfectly executed free kick. It came in the 66th minute after Rodney Marsh had fouled Doug Collins on the right hand edge of the penalty area.

Collins dummied to take the free kick but left it for Frank Casper whose accurate chip was headed powerfully in by WALDRON, running in unmarked from the edge of the penalty area.

The only unhappy note about the excellently worked goal was the fact that the television cameras were there. The free kick ploy was played and replayed on TV throughout the country, thus making it more difficult for Burnley should they wish to use it successfully again.

The principle reason for its success was the surprise element, but football managers up and down the country immediately knew about it and not only would teams be aware about it and prepared when facing Burnley, they might even be trying it themselves.

Just before the goal we'd took a real pounding and Alan Stevenson was called upon to make two brilliant saves from Willie Donachie and Denis Law. But having survived the onslaught the game changed and led to the period during which Burnley scored having put the City defence, and goalkeeper Joe Corrigan, under some pressure.

Once in front we never looked as though we would relinquish the lead and it was Martin Dobson, as the winning captain, who received the shield from FA Chairman Sir Andrew Stephen.

A delighted Adamson said after the game: "They certainly had the better of the first half but we matched them after the interval.

"A lot of the action took place in the penalty areas which was good for the fans and when we were up against it Colin Waldron and Alan Stevenson both played well to keep us in the game.

"Doug Collins also played well and Mick Docherty helped to bring us back into the match with his overlapping runs down the right wing in the second half.

"During the first half the forwards weren't holding on to the ball to enable the midfield men to come up in support but this improved after the interval.

"I was pleased with our back four who settled down quickly again to their form of last season. The match took a lot out of the players but they did very well."

City boss Johnny Hart wasn't happy and said: "I've given the players a right rollocking because we had 80 per cent of the play and were murdering them and then gave away a goal like that.

"The annoying thing about it was that a man had Waldron covered and then let him get in front of him."

One City player was very impressed with Burnley and that was Mike Summerbee who would become a Claret two years later. "This could be one of the great teams," he said.

"I am not talking about the result but the way Burnley played. The big name First Division sides are going to get some shocks this season. Once Burnley have settled in the top flight they could easily become the team of the 70s."

The Maine Road teams were;