Pre-season tour ends with a draw at Kettering 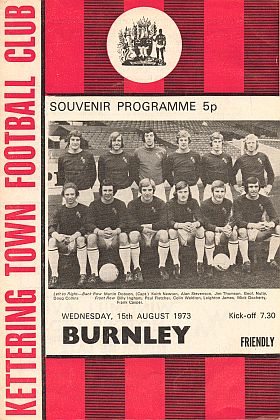 Manager Jimmy Adamson was still without the services of Keith Newton, who had missed the Torquay game, and Doug Collins who had been forced off at half time. He also opted to rest Frank Casper.

Geoff Nulty continued to deputise for Newton at left back with Peter Noble taking the midfield role. Billy Ingham, who had come on for Collins in the Torquay game continued in that role and Ray Hankin was given his first start in the first team alongside Paul Fletcher up front.

The game ended in a 2-2 draw and provided Burnley with a test of stamina more than anything else. At th end of a third game in five days the players were clearly exhausted and understandably so. They had travelled around 800 miles, played three games and undertaken a full training programme.

Consequently the Clarets often looked a little sluggish and Kettering, champions of the Southern League in 1972/73, were able to bridge the gap in class through their spirit and determination.

Noble scored his first goal playing for Burnley in bizarre fashion and young Hankin was laid out as Burnley scored a goal only for the referee to disallow the goal to allow him to receive treatment.

The scoring started with Noble and that first goal. With ten minutes to go to half time Kettering won a free kick on the left. When NOBLE tried to head clear he did no more than head past his own goalkeeper Alan Stevenson to give Kettering the lead.

The lead lasted just six minutes when Burnley too benefited from an own goal scored by the home club's player manager who went on to manage at a considerably higher level than the Southern League.

Burnley had poured forward looking for an equaliser but this Martin Dobson shot looked to be heading wide until Ron ATKINSON diverted it past his own goalkeeper. Noble was to make amends in the second half unlike Atkinson.

He made amends on 65 minutes. Leighton James took a corner on the left. It was flicked on by Jim Thomson for NOBLE who scored from close range.

Kettering had held the lead in the first half for just six minutes; Burnley were only able to keep it for two minutes before Roy CLAYTON, a former team mate of Atkinson's at Oxford, scored from close range after a shot had been deflected into his path.

That was it, a 2-2 draw, and the tired Burnley players trooped off the pitch ready for the journey home with the FA Charity Shield game to come in less than three days.