Outstanding Burnley are too good for Torquay 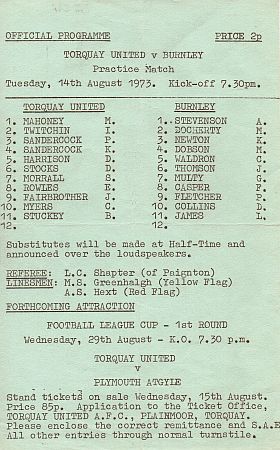 Manager Jimmy Adamson had a selection problem ahead of kick off with full back Keith Newton reporting in with a bruised foot after it had been stood on by a Penzance player in the first friendly.

The manager had said ahead of the game, before the news on Newton was confirmed: "It is important to maintain a settled team at this stage to get players used to playing together again, but if there is any doubt about Newton I will not risk him."

In the end he was unable to risk Newton. He switched Geoff Nulty to left back and brought in new signing Peter Noble into the midfield for his first start.

Burnley made a lot of friends at Plainmoor after turning in a highly efficient display worthy of any First Division side and the gap in class between the Clarets and their Fourth Division opponents was evident throughout.

The home fans, boosted by many holidaymakers, could not fail to be impressed as Burnley cruised to a 3-0 win, and the home manager Malcolm Musgrove was certainly one who thought Burnley had a good season ahead of them.

He told reporters: "Burnley have far too much skill to be anywhere but in the First Division. They're a good side, and any team who can raise their game to play like that in a friendly must have a lot of character."

Musgrove believed Burnley to be the best team in the country in one aspect of the game, the heading ability within the team around opponent's goals.

"At corner kicks Burnley can push up six men who are all very good in the air," he said. "Burnley have Fletcher, Dobson, Waldron, Thomson, Noble and Nulty who can all give any side problems in the air. When the corner kicks are placed accurately there's danger every time."

All eyes, as far as the Burnley supporters were concerned, were on Noble, and first impressions of the £35,000 signing from Swindon were that he would be a terrific asset. he showed great qualities which included neat ball control, intelligent use of the ball, a good heading ability and a determination to run and get stuck in among the heart of the action.

Alongside Martin Dobson, who was in majestic form, Burnley were always in command of the midfield. And with the smooth skills of Leighton James and Frank Casper to admire it was a team performance which left Torquay bewildered and they rarely got a look in.

It took Burnley 35 minutes to edge in front. Casper was fouled on the edge of the penalty area. Doug Collins touched the ball to him and CASPER rifled a right footer into the top corner of the net.

Collins suffered a knee injury during the first half and was replaced after the break by Billy Ingham. He went on to have an impressive second half.

With twenty minutes remaining a ball into the box was headed down by Noble for INGHAM score from close in, and a minute from time the scoring was complete. Mick Docherty move forward into the Torquay penalty area, took Casper's pass, beat the centre half, and centred low for INGHAM to side foot the ball in and complete the scoring.

There was just enough time to get the bags packed and move quickly to the next game which was 24 hours later at Kettering before returning home to prepare for the Charity Shield game against Man City.