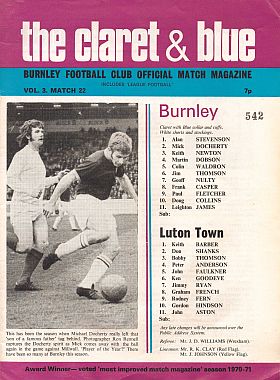 It was a packed Easter programme. A lot of clubs had played on Easter Monday but our game was on the Tuesday night, and ahead of the game came news that Turf Moor, after over five years with just three sides, was to become a four sided ground again.

The old cricket field end had closed during the 1967/68 season to enable the building of the new stand. It opened ahead of the 1969/70 season at which time the Brunshaw Road side of the ground was closed down. The old stand and enclosure were to be demolished with another new stand in their place.

For financial reasons it didn't happen and the 1972/73 season was the fourth with no spectator facilities on that side of the ground, but now, with promotion secured, things were to change.

In an interview with the Burnley Express, chairman Mr Bob Lord said that work would start on the new stand within two weeks. It was going to cost the club a massive £200,000 and would be complete and ready for use half way through the 1973/74 season. It would make Turf Moor a stadium to be proud of.

"I think we have got our priorities right," said Lord. "We could have started to build the stand 12 or 18 months ago, but the team wasn't too successful then. Now we have a successful team and can add facilities to go with it.

"Of course, I am disappointed that we shall not have the stand ready for August when we return to the First Division, but we shall only be a few months late.

"We had a choice to make, a winning team or the new stand. We could not have both. Now that we have got the successful team the stand will follow."

Lord gave some explanation regarding the publicity given since promotion that the club had received about £1.5 million from transfer fees in the last ten years.

He said: "What many people do not realise is that over the same period two-thirds of that money, about £1 million, has been spent on improving facilities at the training ground and at Turf Moor.

"It proves that these transfer fees have not always been needed to pay expenses such as wages. By far the majority has been used to improve facilities for everyone. No other club of comparable size has done anything like that."

Planning permission had been received for the stand which would seat 3,000 and would run the length of the pitch, increasing the overall capacity to 41,000. It had been designed to blend in with the existing cricket field stand.

Commercial manager Mr Jack Butterfield explained that it would be built in three phases. The first phase would include the building of the stand plus catering facilities, toilets, turnstiles and a 50-seater press box.

Phase two, to follow immediately, would include reception rooms and private rooms for directors and guests, with a third phase to be added at a later date to include recreational facilities and a social club.

Butterfield said: "When the stand is finished we shall certainly be the town club with the best ground in Lancashire, and possibly the entire country."

There was still a matter of a game to play against Luton Town and it was another night of superb football from the Clarets in front of the second highest attendance of the season.

We played well in the first half without being able to get in front. Paul Fletcher, the leading goalscorer, was close in the second minute. Frank Casper made the opening for him but Luton goalkeeper Keith Barber made a brilliant save.

We were so much on top during the first half hour, winning a total of eleven corners, that it seemed only a matter of time before the goal came. But, by half time, it was still 0-0 and we still had work to do.

It remained at 0-0 until just past the hour and then, finally, Burnley turned domination into goals.

Burnley took the lead in the 62nd minute with a superb goal by Leighton JAMES. He took a pass from Casper just outside the penalty area, sidestepped a defender, and crashed an unstoppable shot into the far corner.

Five minutes later we were two ahead when Jim THOMSON scored his first goal of the season. Fletcher headed down a Collins corner Thomson's header at goal was pushed out by Barber but the central defender clipped the rebound into the net.

Jim's celebrations were two fold. Because it was his first goal of the season it won him a fiver in a bet he'd had with the now injured Mick Docherty. The two, who could count their goals on the fingers of one hand, had agreed a bet to be paid when the first of them scored a goal.

Two goals in five minutes became three in ten minutes. We went three ahead in the 72nd minute with a goal by Doug COLLINS. He challenged Barber for a Casper cross, the goalkeeper failed to hold the ball, and Collins beat two defenders to scramble the ball in.

The game was won and as the crowd celebrated, Jimmy Adamson introduced youngster Ray Hankin for the last seven minutes. He replaced Casper who had been in sensational form and received a superb ovation as he left the field.

Turf Moor rose to its heroes as the final whistle blew. It had been a momentous season and, as far as Turf Moor was concerned, the competitive football was over. There was the John Angus testimonial to come but it would be First Division football on show again when we returned in August.

There was still the matter of a game at Deepdale. One point was needed and Burnley would, rightly, be crowned champions.

The Easter programme confirmed Brighton's relegation just one season after they'd won promotion from the Third Division. They'd won just one point from their three games, that coming in a 1-1 draw against Portsmouth. Burnley fans would have noted that Ray Pointer, in last ever start, scored for his last ever goal in that game for Portsmouth.

Huddersfield now looked the favourites to go down but it could still be either Cardiff or Preston. North End were two points ahead but with a worse goal average meaning they needed a point against us to be certain of staying up.

And that's what we needed to be sure. We held a four point lead over QPR and had a slightly better goal average, ours was 2.09 and QPR's was 2.05, but two wins for QPR and a defeat for us at Preston could give them a better goal average and thus the title.

So Preston v Burnley - and both needing a point to be certain of getting what they wanted.

Four days after the Luton win, all roads led to Deepdale on the day their ground turned Claret & Blue.