Fletcher and Dobson goals take Burnley back to the top 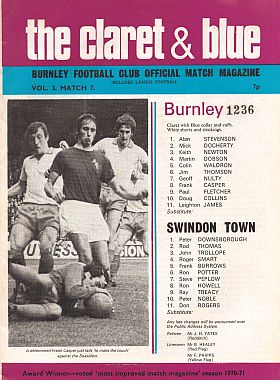 Headlining in the local press during the week was the increase in vandalism in town. "It's Burnley's biggest social problem," blasted Burnley's Development Committee chairman Alderman T. E. Gallagher.

He claimed that it was costing the local authority thousands of pounds annually and called for more spirited action from the public in reporting anything they may see, claiming that particular measure as sadly lacking.

The head of the Burnley division of the Lancashire police force, Chief Supt. Thomas Beardsworth added that he was dismayed at the accusations made against the police that they were giving informants shabby treatment.

The latest attack was at Rosehill school, the third in recent months. A further £1,000 damage had been done to and one man who reported it found his windows smashed a day later.

On the subject of schools there was good news at Towneley where things had begun to calm down after the problems of the previous week. Senior mistress Mrs Joan Burrows confirmed: "Everything is back to normal. It is so quiet you would think nothing had happened.

"Everything is very subdued now and we are working normally. I think those who created the disturbance are feeling a little ashamed of themselves now. They didn't bargain on senior students coming down on our (the staff's side) so to speak.

"We have left the matter as it was. Everyone is now back in school, and no further action will be taken. The whole thing will be completely forgotten."

I presume that meant the nine third formers who had been suspended were allowed back in to the school.

Some poor professor in America had got himself all hot and bothered over reports that there were goings on in the churchyard at St. Peter's, the town's parish church. There were plans to make some changes with some extra flagging but nothing had been confirmed.

However, Mr John Griffiths Pedley, a professor of archaeology and director of the Kelsey Museum of Archaeology, University of Michigan, was far from happy. "As a Burnley lad born and bred and a member of the parish church of St. Peter until I left for America, I have a right to be involved," he said.

"I was disturbed to find last month that a number of tombstones had been uprooted and placed flat on the ground, face upward, to the west of the church. The function of the tombstone is to mark the place of burial of a departed, and in the first place the uprooting of tombstones seems to me inappropriate unless their altered function has been agreed by relatives and next of kin."

The Bishop of Burnley, the Rt Rev R. C. C. Watson confirmed that no plans had, as yet, been published.

The 18-year-old woman who had, as reported a week ago, been held in custody over the theft of a £10 valued radio was released on bail. It turned out that it was her granddad she'd nicked it from and not her dad. She'd broken into his house to take it and then tried to put the blame, wrongly as it turned out, on her boyfriend.

The town said goodbye to millionaire Mr Ian Skipper at a big do at the Keirby. Mr Skipper had sold the local Ford dealers, a company that had been in his family ownership since being formed over thirty years earlier by his father.

Staff with over 20 years service were able to share the top table with the boss who was off to further his own business interests out of town. He'd said he didn't want a fuss but the evening had been arranged by his wife.

Mr Skipper enjoyed it. "If you go out quietly you will regret it for the rest of your life," he admitted. Just two days later news came that, in partnership with Mr Len Jagger, a former director at the car dealership, he'd bought the body building and vehicle distribution interests of Rank Hovis and McDougall. "This is only the tip of the iceberg," he claimed with more big deals to come.

Changes were to come in town.  It was confirmed that the police footbridge was to close and be replaced with a new footpath. For those unfamiliar with this bridge, it led from Church Street, to the side of the car stack, down to the Keighley Green leading to where the Bridge pub is now situated.

Not just that, a landmark of Burnley's past was about to disappear, the by then crumbling eyresore of the Palace theatre block. Again, for younger readers, this was on St. James' Street close to where the former Woolworths and the current McDonalds is situated.

The demolition was expected to start in early 1973 with only the Palace remaining, that building being saved only until the redevelopment got underway. It would also see the end to the passageway down the side of the Palace, often used by shoppers in years gone by.

Burnley Football Club were represented at the town council during the week as the saga of the hoardings on Brunshaw Road continued. Chairman Mr R. W. Lord was accompanied by manager Jimmy Adamson.

Lord revealed after the meeting: "I am happy at the situation and relationships between us and the corporation are amicable."

Alderman Joe Herbert, chairman of the Highways Committee, explained: "Earlier there had been heated remarks on both sides, but now an amicable agreement has been reached. The football club understood the problems our ward representatives were facing and now the hoardings are being moved back. We had a frank exchange of views and the matter was resolved in a friendly way."

On the field, Burnley had an important home game against Swindon Town who were fifth from bottom of the table.

Jimmy Adamson was forced into one change with Dave Thomas unavailable after receiving a Football Association suspension for collecting three bookings. Two days ahead of the game, Adamson confirmed that Geoff Nulty, who had replaced him during the draw at Luton, would replace him and Alan West would be the named substitute.

This was the first home game of the season when my travel plans were changed. Living at home a the time it was a mere two minutes walk to the turnstiles, passing the Park View, where I would join friends for a drink, on the way.

Into October and I was back at university and so it was a trek bt bus from Sheffield via Huddersfield to Halifax, changing there, and then a bus to Burnley.

The game was being billed almost as one between Swindon's top player Don Rogers and our own Leighton James, but it was never that with Burnley having a much stronger all round team than the visitors.

The Burnley Express suggested Burnley could not afford another draw. Still unbeaten, the only concern was that only four of the eleven games to date had been won with the other seven drawn. Even so, we went into the game just a point behind the top two although one had played a game less and the other a game more.

It proved to be the perfect day. Neither leaders Aston Villa nor second place Sheffield Wednesday won and that meant a 2-1 victory over Swindon took us back to the top of the league. It was also a great result from a fixture that, whilst not played very often, had proved difficult for us with the only previous win coming in 1924.

It wasn't a typical free flowing Burnley performance. We were nowhere near our best and clearly missing the influential Thomas. It wasn't a poor performance either but, in a game that either team could have won, we came out on top.

Peter Higgs, in the Burnley Express, wrote: "The fact that Burnley won, when they might have lost, is important. It's games like these that separate the promotion teams from the also rans."

We started brightly but Swindon were soon into the game and for much of the first half looked the better side. They might have gone in front too but for the wayward heading of Ray Treacy. He was presented with three good chances but missed the target with two and saw Alan Stevenson save brilliantly from the other.

Both teams had the ball in the net. Frank Casper, rightly, saw his effort ruled out for offside but when Steve Peplow replied, referee Mr Yates initially gave the goal before speaking to a linesman who had flagged for a foul in the build up.

It was proving difficult and we were fortunate when Swindon's Peter Noble broke through only to be pulled up for a handball, and if that was fortunate then there was a big sigh of relief when Keith Newton's handling offence in the box was given outside. Swindon should have had a penalty.

With just over half an hour gone we were so fortunate to still be level and then, against the run of play, we went in front.

It was a simple goal, coming from a long clearance from central defender Jim Thomson. It sailed over their defender Ron Potter leaving Paul FLETCHER clear. He saw goalkeeper Peter Downsborough coming off the line and headed the bouncing ball over him and into the net.

Stevenson was again alert in two first half incidents, robbing Noble and then Rogers with good saves and eventually we went in at half time with a somewhat fortunate 1-0 lead.

Things improved initially in the second half. We had our best spell of the game with both James and Nulty coming close to getting a second.

But Swindon got back into it with the most controversial of goals. Noble chased a long ball into the box, came up against Thomson and went down. Astonishingly, the referee fell for it, awarded the penalty which ROGERS stroked into the corner.

Noble had won that but he then missed a sitter to give his team the lead and that proved costly. Swindon had got themselves very much on top again but then the game turned back our way with what proved to be the winning goal.

Casper put in a strong challenge to rob Joe Butler of the ball down the right wing and then hit over the most precise of crosses. It was met by Martin DOBSON who scored with a classic downward header which Downsborough could do nothing about.

There were ten minutes left but there was no way back for Swindon and Burnley had secured their fifth league win of the season and gone back to the top ahead of the big clash with promotion favourites Sheffield Wednesday at Hillsborough a week later.

It had never been a James v Rogers clash, and Doug Collins had been our best player, closely followed by Stevenson who again made some very fine saves.

Adamson was delighted with the result. "I was very pleased with the way the team lifted themselves and came back to get the winner," he said. "Last season we were not doing this, but on Saturday it was the most encouraging aspect of our play."

It was well done to Fulham and Preston for helping us back to the top. Fulham had beaten previous leaders Aston Villa 2-0 with former England midfielder Alan Mullery getting one of the goals.

Sheffield Wednesday were held to a draw by fourth place Preston who were, at this stage of the season, mounting a promotion challenge of their own.

Oxford were the biggest winners, seeing off Sunderland by a 5-1 scoreline at the Manor Ground with Hugh Curran getting a hat trick, the first of the season in the Second Division.