Clarets win at Cardiff to go back to the top 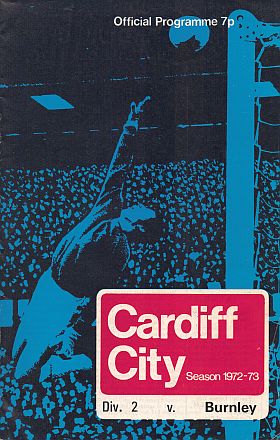 Many Burnley supporters had problems getting to Cardiff, but more of that later in the report. They weren't the only ones with news that there would be limited public transport in Burnley on Saturday evenings.

Bus drivers and conductors (and when did we last have bus conductors?) had just about had enough of the behaviour of passengers and voted to ban all services after 9 p.m. for a minimum of one month as a protest against late night attacks by hooligans.

The branch secretary of their union, bus driver John Sutcliffe, explained. "Feelings among crews that action must be taken against hooligans who terrorise us on late night buses have been rising for months," he said. "Now the men have shown how they feel."

At a meeting of the council's Housing Committee, Alderman D. Newlove accused residents of Layfield Street and Lancaster Street of holding the town council to ransom.

The Deputy Borough Architect Mr Fred Staziker had told the meeting that 18 houses in the streets were still occupied and couldn't be demolished with contractors unable to move on site.

These were streets in the lower Oxford Road area and the council needed to demolish the houses to provide 76 one-bedroom units to re-house people displaced by the Calder Valley Motorway and Westgate Link.

There was more trouble for the council when children and teachers were joined by head teachers in the fight to save the Central Baths. In a letter to the town's Chief Education Officer, Mr G. B. Hill, the Burnley Association of Head Teachers asked the council to withdraw its decision to close the baths pending an assessment of the accommodation available for schools at the new recreation centre.

They also asked that consideration be given to the inclusion of a teaching pool in the plans of the next secondary school to be built in the town.

The letter said: "We feel the safety of the children is being jeopardised. Head teachers will find it necessary to place further limitations on numbers of children who will be able to participate in instructional periods for swimming.

"The junior schools have a fine record for teaching children to swim, and the secondary schools build upon this record in connection with training for life saving. This work is bound to suffer because of the limitations of facilities."

The fight was being stepped up with two young children setting up a petition against the closure of the long established baths behind the town hall.

Meanwhile, as the building of the new William Thompson Recreation Centre continued, there was news of the sort of prices people would be required to pay when it opened in 1974.

Director of Parks and Recreation, Mr John Mattocks had put forward a suggestion for a family membership scheme costing no more than £2.50 per year and it was recommended in principle.

An option to charge extra for people living outside the new Burnley district was rejected and it was agreed that single membership should be £1.50 for adults and £1 for juniors with non-members paying 5p per visit.

It was all looking good, although 'looking' is perhaps not the best word. Mayor, Councillor Abel Bridge said that people kept telling him the new building was a monstrosity. Councillor Mrs Ada Smith jumped in and said the new sports hall at Towneley Comprehensive School was hardly high on the beauty stakes.

The new Contimans supermarket was opening that week, Burnley's first Sunday and not Saturday store. Ahead of the Sunday opening they announced their price list for their top of the range products.

A large bottle of Brut after shave would cost 49p and, in the same department, a large bottle of Dettol would retail at 25p. In menswear, shirts were £1 and underwear at 10p although it was stressed that these were seconds. I am assuming that meant there was a slight fault rather than the purchaser being the second owner.

The Clarets had found themselves a new fan from Switzerland. 26-year-old Pierre Mosching was working in town and had been to Turf Moor three times and liked what he'd seen.

Pierre, from Lausanne, was in Burnley learning about textiles as well as brushing up on his English. He had taken a liking to English pubs, English beer and even fish and chips as well as the Clarets.

He was awaiting the arrival of his fiancée and said when she arrived they wanted to go to the Lake District and Scotland to see our mountains. From Switzerland? Our mountains? I'm not sure what he was expecting.

As for Burnley fans ready to travel to Cardiff City on the LeagueLiner, there was some bad news. Less than two days before the game the club cancelled it. The decision was that of commercial manager Jack Butterfield who could not get reassurances that the return journey would run smoothly because of a potential rail dispute.

"We know it is terribly disappointing for the fans, but what else could we do?" he said. "The fans have been very understanding but we know how disappointed they must be."

He confirmed the club would set a deadline by the following week for people reclaiming their ticket money.

Rail dispute? I got there and back with no problems via the train and saw the Clarets fire themselves back up to the top on a day when I helped stop the game, receiving words from referee Smith and Welsh international Leighton James.

It was a 1-0 win but a convincing 1-0 win. We crossed the border into Wales and showed the locals just why we were such a hot tip for promotion and in completing our fourth double of the season we demonstrated the vast gulf that existed between the two sides and we left Cardiff facing a desperate battle to avoid the drop into the Third Division.

The reason the win was by only one goal was because the one part of the team that didn't function maybe as well as it should have done was that of putting the ball into the net. In the first half alone we created five clear cut chances which should have had the whole thing wrapped up by half time.

Two of the previous away wins, those at Bristol City (in December) and Swindon (two weeks before this trip to Cardiff) had seen Burnley win 1-0 after scoring an early goal and it was exactly the same at Ninian Park.

During the opening 45 minutes Burnley really did have the look of Champions. From the start, Burnley looked a different team from the one which had stumbled to defeat only seven days earlier.

There was an assured fluency about the play as the Clarets swept down on the Cardiff goal looking set for a hat full, but despite all the promise there was to be no repeat of the third minute goal which settled the match.

As a 'team goal' it was probably as good as any Burnley had scored all season. Martin Dobson began the move by winning the ball in midfield and pushing it out to Leighton James on the left wing.

The Welsh international's cross beat goalkeeper Billy Irwin. Paul Fletcher headed the ball back from the far post and Frank CASPER made no mistake with a simple header.

At this point I was one of a small number of Burnley supporters who took centre stage. This was in the days of football grounds having no segregation. We'd positioned ourselves on the terracing on the side opposite the main stand at Ninian Park (the side to the right of the area we most recently occupied as away fans at Ninian Park.)

When you score an early goal it is sometimes difficult not to show any emotion. We jumped up and down in celebration; some Cardiff fans also jumped up and down. They were ready to pounce. Thank goodness I was only 21 at the time and somewhat more nimble than I am now.

It was down to the front, over the wall and onto the pitch to the amazement of the local on duty Heddlu.

The referee blew to stop proceedings and came over for a quiet word. Taffy, who I knew well, also came over for a less than quiet word. "What the **** are you doing?" he calmly asked. Now, let's get things right. Leighton James has an affection for Cardiff similar to mine for Blackburn so I think he approved.

The Heddlu took us round to the enclosure in front of the main stand from where we watched the rest of the game with some level of safety.

Recalling the game now and Casper had given us the lead, and Frank proved to be the game's outstanding forward. Make no mistake, when Casper was in form he was something very special and, alongside James and Fletcher we were opening up Cardiff at will.

Unfortunately the chances came and went. James was more often than not the culprit but the best chance of the lot fell to Billy Ingham who had been preferred to Doug Collins who wasn't fully fit.

He was inside the six yard box when presented with a great  chance but could do no more than head weakly straight into the hands of Irwin.

Even so, there was no hanging on. Cardiff offered little threat and when the final whistle went the points were ours even though we might have done our goal average a bit of good with a few more goals.

Manager Jimmy Adamson was pleased."It was important that we came back after our defeat last week. The one thing we don't want is a run of defeats," he said.

"We would have been happy with a point before the match but we were delighted to come away with two. I thought we played well, particularly in the first half when we should have been three goals ahead at least."

Explaining the decision to play Ingham, he added: "Doug Collins was only 95 per cent fit and we decided not to use him at all unless it was necessary. Billy Ingham played well, getting into the thick of it, aiming the ball and using it well."

QPR could do no more than sit and watch. Their game against Sunderland at Roker Park was ruled out because of the Wearside club's FA cup quarter final against Luton. Bob Stokoe's team were on their way to the FA Cup Final but, because of their cup exploits, it guaranteed that Burnley would go back to the top with a win.

We had a one point lead over QPR and we'd both played the same number of games. Then came Blackpool and Sheffield Wednesday but fifth place Fulham were the ones, us and QPR apart, who could get the most points.

If they were to win their last nine games they would end the season with 56 points. That meant we needed ten points, or five wins, from our nine games to ensure we'd be a First Division club again.

We'd two games coming up in the next week and both at home. First was Portsmouth for a game previously postponed and then Millwall.