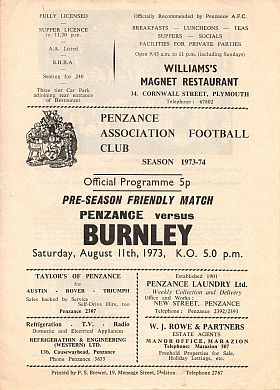 The club were taking in two games in the South West, with a game against Torquay to come three days later, before facing Kettering ahead of the FA Charity Shield against Manchester City at Maine Road.

With Burnley already in Cornwall news came through less than 24 hours before the game that it could be called off. Penzance were told by their county FA that they could not go ahead with this fixture because it was the opening day of the South Western League.

The Cornish FA told Penzance Football Club that they must call off the game, but the club chairman, Mr Len Stanbury, announced they would defy the FA and player the game.

He said: "We decided we had to be fair to the public. All the arrangements for the match had gone ahead and we were not going to let down the fans and Burnley Football Club. Now we are prepared to face the consequences."

Burnley might have wished it had been called off when they were stuck in traffic. Having stayed in Exeter overnight, just over 120 miles from Penzance, it was a five and a half hour journey as they crawled through heavy traffic.

But the game did go ahead and provided a treat for the Penzance public whilst giving Burnley what was described as a satisfactory work out in the first public game.

Over 3,000 spectators turned up at Penzance's Penlee Park to see Jimmy Adamson start with the team that had played much of the previous season. Mick Docherty, fit again after suffering a cartilage injury at Huddersfield, was at right back with new signing Peter Noble joining Billy Ingham and young Ray Hankin on the substitutes' bench.

It was nearly the perfect start with Geoff Nulty having a first minute header blocked on the line, but it didn't take the Clarets too long to go in front with the first goal arriving in the 12th minute.

Leighton James beat two men in a run down the left wing and pulled the ball back to give Frank CASPER a simple chance from six yards. His first shot was blocked but he made no mistake with the second.

Penzance had very few opportunities but did come close to an equaliser with 25 minutes gone. Inside forward Williams, who had a very impressive match, split the Burnley defence wide open with a right wing run.

His cross found an unmarked Thomas who saw his shot pushed out by Alan Stevenson for a corner. It gave the locals something to cheer but for most of the match it was Burnley's play they were able to enjoy.

Paul Fletcher completely dominated the home defence. Martin Dobson certain caught the eye with a series of surging runs from midfield and it was from such a run that Burnley doubled the lead just before half time.

DOBSON picked the ball up, burst through into the box, rounded the centre half and rammed home a left foot drive from ten yards.

The scoring was over early in the second half. Just six minutes in, James cut in from the left and shot. Goalkeeper Collins saved. pushing the ball out sideways but only as far as CASPER who slotted the ball home from a few yards out.

Two minutes later we finished it off with the best goal of the lot. Keith Newton made a brilliant long pass downfield. Fletcher flicked the ball forward for NULTY to run on to it, take it round the goalkeeper and score with a left foot shot into the empty net.

There was time for both Hankin and Noble to get some minutes on the pitch with Noble almost getting on the scoresheet on what was his Burnley debut.

A delighted Jimmy Adamson said after the game: "It was a good, clean game and Penzance never gave up but kept coming at us. This was just what we needed to get into the match practice again."