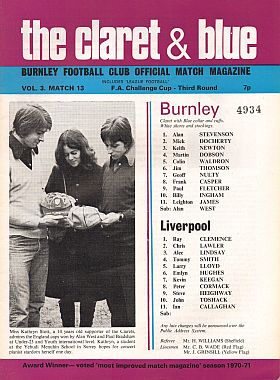 The weather hadn't been particularly hostile during the week so it was something of a surprise to see the local paper headline with news of ice floes.

Thankfully this wasn't in Burnley but in the Antarctic, but that was bad news for one Burnley couple Mr and Mrs Fred Baxter whose 22-year-old grandson Paul had just been reported safe after a five day ordeal.

He'd moved to live in New Zealand and was one of four students on an expedition in the Antarctic that took a serious turn when their trimaran jammed in thick ice and had to be abandoned. They had to cling on to ice floes and were rammed by an iceberg, followed by killer whales and blown by blizzards.

They only survived by huddling behind ice shelters and managing to find food. To eat they picked up a Penguin, literally, although I don't think this one had a chocolate coating. Apparently it didn't put him off and he was said to be keen to get back there to study fish life.

One Burnley pensioner, a Mrs Florence Jenkins, went to Scotland to bring in the New Year but on her return found her house ransacked by intruders who had stolen nearly £80 worth of property.

It was the third time in four years that she'd been broken into and she'd had enough and called for the removal from the Bench of the 'do-gooder' magistrates and wanted them replaced by a stipendiary magistrate.

The burglars had even stolen £3 from her gas meter and that led to her getting into a row with Gas Board officials. She said: "The trouble is that when these intruders are caught they won't be dealt with severely enough by the magistrates.

"Far too many of them are do-gooders and I think we should have a stipendiary. The attitude today is one of smack their hands and don't be naughty boys, and there is far too much of it.

"I'd like to start a campaign to bring back the birch, because with the punishments being handed out to thieves today they think they have got away with it."

Mrs Jenkins didn't get her way. Use of the birch as a judicial punishment was abolished in Britain in 1948 and there was no return despite her desire to petition for it.

There was a another burglary case that went to court in the same week when a 30-year-old man from Burnley was caught red handed leaving the back of a house in Oxford Road with stolen good including a radio, a coat and a watch.

When the occupier came home he hid in the backyard toilet but was seen when he tried to escape and was apprehended by a passing policeman and admitted what he'd done. When he got to court he said he'd been led their under false pretences by another man and incredibly was found not guilty.

Back in 1973 the Burnley Express also dealt with medical matters. In this week, one reader wrote: "I have been home from a mental hospital for 20 years and at the time a doctor suggested I should look after my bowels.

"However, Epsom Salts have no affect on me now, and I should be delighted to hear what I should take for my bowels. My own doctor says he cannot do anything."

The response was that the reader should be able to have normal bowel motions without help by drinking plenty of fluid and eating rough food. I wonder why this idea was discontinued.

Residents of the Kibble Bank housing estate had been asking for better communication facilities. I suppose today that would have been faster broadband but forty years ago they'd handed in a petition to MP Dan Jones asking for the installation of a public phone box.

Mr Jones said he'd take up their request with the Post Office and would also take it upon himself to visit the area to determine a suitable position for any phone box.

Burnley FC Chairman Mr Bob Lord had submitted plans to build two bungalows on the land around his home in Whinns Lane, Read.

Burnley Rural District Council turned down his plans citing that any such building would lower the standard of property in the area. He'd got two councillors on side who were in favour of supporting the application but it still wasn't passed.

There was some big news from the club that week. The club would be running a special train to the league game against QPR at Loftus Road later in the month. Not an ordinary train either, Burnley supporters would be the first to use a new super train called the League Liner.

Facilities provided on the train would include a cinema showing sports films, a discotheque and an audio system enabling passengers to tune into music ranging from classical to pop.

Burnley were chosen because of the work carried out on the project by the club's commercial manager Mr Jack Butterfield. He was on a special committee that commissioned the 420 seater train which would use the best quality British Rail stock, the type used to carry race goers to Ascot no less.

Butterfield said: "We feel very honoured that Burnley should be chosen to launch the train. It will be an historic journey. This is the only train of its kind at present but we hope it will be the forerunner of many more.

The cost of the train, from Burnley Central to Euston and return was £3.50 per passenger.

Having beaten Aston Villa a week earlier, Burnley were hoping to engage in the traditional special cup tie training. That meant a stay in Blackpool where pictures would show them running on the beach.

The trip had to be called off and so it was just normal training at Gawthorpe for what was billed as the game of the season.

With Doug Collins still suspended, Jimmy Adamson kept the side that had won at Villa with Alan West being named substitute ahead of youngster Ray Hankin.

"We dearly want to win this game and I'm confident that we can," Adamson said. "We are expected by most people to get licked. This situation helps us. We are the underdogs and the pressure is off us. There is nothing a team from a higher division likes less than to visit a team from a lower league in the cup.

"We have to give Liverpool credit for being a good side, but I feel that we can raise our game sufficiently to beat them."

Rival boss Bill Shankly said: "I'm pleased to see Burnley in the position they are in. We want to see as many Lancashire clubs as possible in the big league. There were eight teams from Lancashire in the First Division when we were promoted in 1962 but now there are only four.

"It looks as though Burnley will increase the number to five and this is what I want to see."

He added: "We have had them watched and we respect them. We would rather have had a home tie for the sake of our supporters but we are please they will have only a short journey.

"We are looking forward to coming to Burnley. We've always had a good relationship with the club. It will be a good game and it's always a good playing surface at Burnley."

I was ready for the big game even though I was feeling a little worse for wear after a night out in Blackpool with friends to celebrate my 21st birthday. That had been a good night and although Burnley couldn't beat the country's best team of the time it proved to be a good Saturday too.

The big crowd inside the Turf were treated to an unforgettable ninety minutes of nerve tingling cup football that lacked nothing other than goals. The quality of football on offer was of such a standard that the two teams received a superb ovation at the end.

Burnley matched Liverpool all the way and there was no doubt that the Merseysiders were grateful at the final whistle to be getting another opportunity in a replay. They had suffered a fright and they knew just how fortunate they were to hold a brilliant Burnley.

Both teams missed chances that they might have felt they could have done better with but Burnley, while giving Liverpool all the respect in the world, took the game to the First Division club and but for immense performances from Larry Lloyd and Emlyn Hughes the result could have been so different.

From start to finish it was end to end. We had the edge in the first half but Liverpool were perhaps the better team in the second half. That was until the last ten minutes when the Clarets really grabbed the initiative and went for the win. But Liverpool were hanging on when referee Harold Williams blew the final whistle.

What a game it had been, and we had a replay to look forward to.

Left back Keith Newton, who had been given a free transfer by Everton at the end of the 1971/72 season, said: "I will be going back to Merseyside under a lot happier conditions than when I left.

"Things did not work out for me at Everton and I was never happy there. I am very pleased to be going back as a member of such a successful team.

"No doubt there will be some Everton players at the replay against Liverpool and even some of their fans. Obviously I'd like to have a good game, but I'm not going to worry about it.

"Today was a good match and I thought we played well, although we lost our grip a bit for a while in the second half. We were unlucky in front of goal, particularly in the first half. We created good chances that could easily have gone in. If we had gone one goal I think it would have been enough."

By Sunday there were long queues at Turf Moor for replay tickets and amongst them was arguably Burnley's most fervent supporter 42-year-old Mr Roy Kilby of Great Harwood. Speaking to reporters, Mr Kilby said: "The most important thing is that we have proved beyond doubt that the team can hold its own against the best in the First Division.

"I believe we can win the replay. After all the team has been playing better away than at home. They raised their game yesterday and I think they will do so again on Tuesday."

Just for good measure, Burnley learned that should the replay be won at Anfield then it would be another First Division club at home in the fourth round after being drawn against Manchester City.