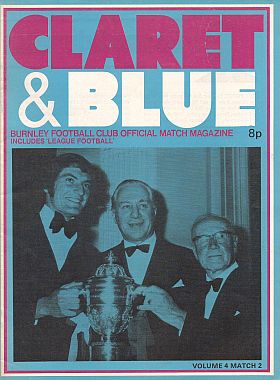 Coventry might have been visiting but there was news that one traditional Turf Moor event would not be going ahead in 1974 because of the football fixtures. Burnley had been given a home game against Birmingham on Good Friday which meant the popular religious service could not be held at the ground.

Disappointment was expressed but Mr Stanley Pickup, secretary of the Bishop of Burnley's Good Friday Committee, which organised the annual event, said: "The football fixture was only part of the reason we decided to make a change to present other aspects of the Christian message. We are in the course of preparation for a musical drama to be performed at Turf Moor on May 19th, with a theme of thanksgiving for God's goodness."

He hoped it would prove just as popular and he confirmed arrangements for a fundraising garden party to be held in one week's time at Rowley Hall when there would be everything from bring-and-buy stalls to pony rides and even a Punch and Judy show and discotheque.

Meanwhile Burnley Corporation's Parks Department were playing the role of King Canute in a desperate bid to stop a dangerous tide of broken glass in the town's parks and recreation grounds. A local headmaster of a school, responsible for the welfare and safety of 400 youngsters, expressed extreme concern about wounds being inflicted on some of the children. He described them as deep to the bone and horrible and said the cause was jagged broken glass lurking in the lush grass of a nearby recreation ground.

Mr J. Mattocks, the Parks Director, was fully aware of it and very forthright in his condemnation of those responsible. "It is sheer damn thoughtlessness," he said. "It really is a shocking problem. For example, it is not unusual for us to have to drain the Thompson Park paddling pool twice in one day.

"It is unthinkable that people would lob a bottle into that paddling pool, but it is happening regularly. I am very perturbed about the situation. The whole matter has been reported to the Parks Committee and, in turn, to the accident prevention body."

He admitted there was nothing that could be done if people didn't stop of their own volition while headmaster at Hargher Clough, Mr J. T. Francis said: "I am bitterly concerned and distressed about the wounds being inflicted on some of the children here.

"We have a wonderful amenity on the nearby recreation area, which is used for school games and outdoor activities. The Parks Department does a splendid job in keeping the area tidy, but it cannot cope with the bottle throwing and smashed glass."

Last week we had the man who climbed the chimney and then went on to hit someone in the street, now we've gone one better with 21-year-old David McGarr hitting two youths in the street for no apparent reason.

The two youngsters were walking along Trafalgar Street when the accused and two other men approached them and for no reason whatsoever the accused hit them in the face with his fist, knocking them both to the floor. Once grounded he kicked them both about the head and body.

Both were taken to hospital for treatment and both were detained for several days and in a statement to police Mr McGarr said he had seen them in the Hop public house and thought they had been staring at him.

He said: "I don't know how many times I hit him (Magnall) I didn't go berserk though. Then I grabbed the other (Wright) and hit him a couple of times.

"They fell to the floor and I kicked both of them a couple of times. I'm not normally violent, but I was under the influence of alcohol."

Mr Peter Lawson (defending) said McGarr had drunk ten pints and a few shorts and the drink must have aroused his aggressive instincts.

Another man paying the price for drinking too much alcohol was 60-year-old David Loughlin. He suffered from arteriosclerosis and used an invalid carriage to get around whilst also having to care for his bed ridden wife Cissy.

Unfortunately he was apprehended driving his carriage having drunk too much alcohol and received a 12 month ban from driving. "We'll manage somehow," he said. "We'll have to rely on relatives to help us, but the last think we want is sympathy."

When does a convenience become an inconvenience? That was a question put to town council members when Alderman Frank Bailey referred to the proposed demolition of the public conveniences in Dent Row.

He wanted to know if they would be replaced in the near vicinity. "And if not, why not?" he asked.

Councillor John Hudson explained that it was not the authority's policy to demolish public conveniences but in this particular case it was in the way of road widening. He did add: "The committee decided that if the lack of this convenience proves to be an inconvenience we shall have another look at the situation."

But it was a second home game in four days for Burnley with manager Jimmy Adamson saying he expected to name the same team that had beaten Chelsea for the visit of Coventry City. Paul Fletcher had recovered from a knee injury he sustained in the Chelsea win and was expected to play and Peter Noble was likely to continue at right back.

Adamson said of Noble: "Many players wouldn't have been too happy about making their debut in front of the home fans in a new position, but Peter had no hesitation in accepting the chance. He went out and did a fine job and this shows what a good professional he is."

Coventry, like Burnley, had picked up maximum points from the first two games of the season and this was set to be another tough game for the Clarets.

Tough it was and in more ways than one. Burnley would almost certainly have lost this game but for the brilliant Paul Fletcher. He was a constant threat to the Coventry defence and, in the end, the only way they could stop him was to have him stretchered off.

By the time that happened he'd done enough to earn us a point from a match which mostly belonged to Coventry.

The foul which ended Fletcher's afternoon reflected the worst side of professional football. It was a dreadful tackle by Coventry centre half John Craven and to make it worse was committed after the whistle had been blown.

Adamson was fuming after the game, and said: "This is a case of a player who is a danger to the opposition being taken out of the game. I like cut an thrust football, but there is a border line. And this was over it."

That one foul couldn't be allowed to disguise the fact that this was Burnley's worst performance for some time. They completely failed to recapture the form which had brought impressive victories over Sheffield United and Chelsea.

It was sluggish. There was no fluency or cohesion. The windy conditions didn't help but they were not the major cause of Burnley's problem. Adamson said something had been wrong in the pre-match approach and it was clear that many of the players weren't in the mood.

The crucial area of midfield was won by Coventry as we failed to get a grip and we struggled to come to terms with the fine play of Dennis Mortimer and the lanky Tommy Hutchison.

Defensively neither Colin Waldron nor Jim Thomson looked comfortable and Keith Newton was more than once exposed by Coventry's neat raiding.

Even so it was Burnley who went in front just before the half hour. Leighton James, who had a decent game on the left, drew two defenders towards him and then cut inside to cross to the far post. Coventry goalkeeper Bill Glazier had no chance as FLETCHER headed the ball back over the goalkeeper's head and into the far corner of the net.

Unfortunately the lead lasted for no more than four minutes. Newton allowed Brian Alderson to get in a cross from the right touchline and Alan GREEN had yards of space to steer his shot wide of Alan Stevenson.

It was 1-1 at half time then Coventry really came at us at the start of the second half but it was Burnley who found the net through Fletcher who was unfortunate to see his effort ruled out for offside.

Then we fell behind. A ball played quickly into the box saw GREEN spin round to hit a low shot towards goal. Stevenson got a hand to it but couldn't prevent it from tricking into the net.

We were up against it now. Green should have added a third, which would have seen them go home with both points, but then, with quarter of an hour remaining, we rescued a point.

James was fouled down the left and Doug Collins placed his free kick accurately for Fletcher to beat everyone in the air again. This time he found Martin DOBSON who gratefully accepted a simple chance.

Burnley went looking for a winner and put Coventry under some pressure but once Fletcher was stretchered off our hopes of getting that winner were gone and we had to settle for a point.

It was a point we were thankful for. On another day we could so easily have lost this game but it meant we were back on the road to Spurs and Wolves still unbeaten.

Only Leeds continued their winning run. A 3-0 win at Spurs ensured they went top with a one point lead over Derby, Burnley, Coventry and Southampton. Down at the bottom, Chelsea were now the only team without a point.