An England schoolboy international, he joined Burnley as an apprentice in 1972, made his debut for the first team as a 16-year-old, one of very few players to achieve that, and more recently, after over a quarter of a century of service to the club, he's received long overdue plaudits for his work with the young players at Turf Moor.

That's the story of youth team coach Terry Pashley who first arrived at Turf Moor in 1972 as a 15-year-old. He'd played for his country at schoolboy level and was much sought after. It was something of a coup for Burnley, then in the second division, with much higher placed clubs having been keen to get his signature.

Burnley were to be his club and he arrived in that summer of 1972 along with other young hopefuls. There were high hopes for the young Pashley. He progressed well and signed his first professional contract on his 17th birthday in October 1973. By then he'd already made that coveted first team debut.

It came 23 days before his birthday when he was introduced as a substitute for Doug Collins in the 7-0 home win against East Fife in the Texaco Cup. Unfortunately for Pash he had to wait more than two years for his next involvement but, when he did, it was in a first division game against Birmingham in April 1976.

Keith Newton was ruled out with injury, the only game the former England full back missed all season, and Pashley stepped in for a game that Burnley won 1-0 with a goal from his former youth team mate Ray Hankin.

It proved to be his only appearance in the top flight of English football in a game that, until we beat Manchester United in August 2009, was Burnley's last win in top flight football.

He started the next season as first choice, but a difficult run of results cost him his place. His struggle to establish himself as a first team player was perhaps no surprise given the players we had at the time. Newton had been at left back initially and when he moved to the right in the following season it was Ian Brennan who came in at left back.

Brennan came back in and Pashley, who played another 17 league games for Burnley in the next two seasons, struggled to dislodge them. By the summer of 1978, with Brennan very much first choice, he made the decision to move on.

Right at the start of the 1978/79 season he signed for Blackpool on loan before making the move a permanent one a month later, Burnley getting £30,000 for his services.

Away from Turf Moor, Pashley went on to have a good career with Blackpool and then Bury, where he moved after five years at Bloomfield Road. Along the way he played for managers who he would be alongside on his return to Turf Moor.

At Blackpool, where he made 208 league appearances, he played for Stan Ternent. He signed for Bury in August 1983 and within months Martin Dobson, who had been in the Burnley side when he made that debut against East Fife, became player manager.

Pash was in the Bury team with a claret and blue flavour that won promotion to the third division in 1985, just as Burnley were heading in the opposite direction. With Dobbo in the side too, and Frank Casper on the sidelines as assistant manager, he also played alongside such as Leighton James, Joe Jakub and Kevin Young with both Alan Taylor and Brian Flynn both later moving to Gigg Lane.

His time at Bury, and as a professional footballer, came to an end in 1990. On 13th May 1989, he lined up for Bury in the last game of the 1988/89 season. A team that included future Clarets Jamie Hoyland and Liam Robinson drew 0-0 at home against Bristol Rovers.

It was Pash's 217th league appearance for Bury but his last. He didn't feature in the following season because of injury and in May 1990 had to accept defeat and hung up his boots.

He was back in work just days later, returning to Turf Moor to head the Football in the Community Scheme, a role he carried out for almost two years. His career then took another turn in 1992 when Jimmy Mullen offered him a position within the youth department at Burnley.

I think Pashley will look back now and believe that to be one of the biggest decisions of his career. He took the job and over 20 years later he's still at the forefront at Burnley as we try to groom young footballers.

It must have been so difficult for him initially. The club had little money to spend, virtually nothing on youth development. He worked alongside Harry Wilson initially. Alan Harper was involved for a while and Stan Ternent brought in both Mick Docherty and Jimmy Robson, although Doc in the end worked with the reserves. More recently he's worked alongside Andy Farrell.

His reputation is now all in the hands of others; of the kids who come into our youth team and hopefully go on to make first team footballers. Despite all the odds, he oversaw the progress of such as Chris Brass, John Mullin, Paul Smith and Paul Weller in the 1990s along with Andy Oakes, surprisingly not offered a professional deal at Burnley but a goalkeeper who went on to play Premier League football with Derby County.

In the more recent years we've seen the likes of Richard Chaplow, Kyle Lafferty and Jay Rodriguez come through his youth team and go on to play regularly in the first team before being sold for big money.

And there's Chris McCann, who progressed at the same time as Lafferty, going on to play Premier League football for us and being named club captain for the 2011/12 season.

There are others who haven't quite made it and then some who have made good careers elsewhere such as Marc Pugh and Neal Trotman, currently with Bournemouth and Chesterfield respectively.

He's been doing sterling work for 20 years but suddenly, in 2012, it's all been recognised because of the progress of the youth team in reaching the semi-final of the FA Youth Cup and with ten of the players having been rewarded with their first professional contracts.

Pashley has also had his moments with the first team, being called into action when necessary. He coached the side when Owen Coyle left in January 2010 and was in the dug out with new boss Brian Laws at Manchester United.

He also stepped up when Brian Laws was sacked and again more recently when Eddie Howe's mum sadly passed away.

Each time he's returned to working with the young lads at the club and I think that's where he's happiest, working hard to find the next star for Burnley Football Club.

Not many can claim to have more than a quarter of a century of service at Burnley. Pash has, and, while he had to move to establish himself during his playing career, he's appointment in 1992 as youth team coach has proved to be a valuable one at Burnley. And there will be no one happier when the next young player makes his way into, and establishes himself, in the Burnley first team.

In 2011, Terry Pashley won the Supporters Clubs Special Achievement Award for his outstanding service to Burnley Football Club. The award was presented on their behalf by Jay Rodriguez (see below). 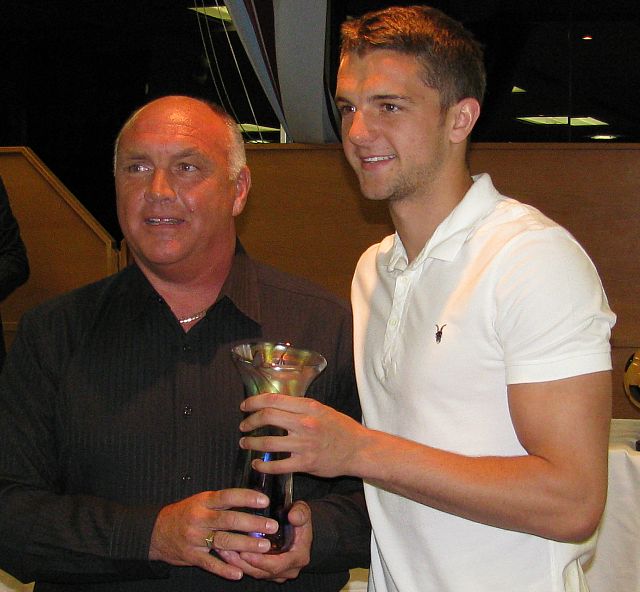