January 1976 brought to an end one of the most distinguished of post war Turf Moor careers. We'd just gone out of the FA Cup at Blackpool and were languishing in the bottom three of the old First Division.

Chairman Bob Lord decided it was time to wield the axe and change manager and so Jimmy Adamson, part of the fabric at Burnley, departed after almost thirty years as player, coach and manager.

If Lord thought it was going to do the trick he was so badly mistaken. Adamson had the full support of the players and many of them were far from happy with the decision. By the end of the season we were relegated and at the time of writing Burnley Football Club have never played in the top flight of English football since.

Adamson had arrived at Burnley from the north east of England, from Ashington in Northumberland to be exact. That was in 1946 at the age of seventeen. He joined the club as a junior but he impressed enough to be offered his first full contract at the beginning of 1947, even before his eighteenth birthday.

He was playing in the junior teams as Burnley won promotion and reached the FA Cup Final in the first season after the war, indeed he was to play no higher than the reserve team for some time.

His first team debut didn't come until February 1951 when he replaced Reg Attwell at right half. The game was at Bolton, a game we drew 1-1 with the Burnley goal scored by Bill Holden. Such was his form he kept Attwell out of the side for the remainder of the season.

He joined a Burnley team that already included defender Tommy Cummings and more recently inside forward Jimmy McIlroy. Little could the Burnley fans of the time have known that these three players would all still be in the team nine years later as we lifted the title.

Once in the side, Adamson was in to stay and he was first choice for the next eleven years. He was adept in any of the half back positions. He was at centre half for a long spell when Bobby Seith played, and also during a period when Walter Joyce was in the first team, but he was mainly considered a right half, and a cultured one at that.

He wasn't the quickest, but he was a player who was a great reader of the game and also a good passer of the ball. He linked up with McIlroy superbly, and it remains a mystery to many that not once did he ever play for his country. His only honours were one England B cap in 1953 and a Football League appearance in 1960.

He became captain of the side and over a three year period led the Burnley side to some success. In 1960 he became just the second Burnley captain to lift the Football League Championship Trophy and two years later he was only the second captain to lead a Burnley side out at Wembley. And between were the European Cup games.

The 1961/62 season was a heartbreaking one for Burnley, finishing second in the league and losing the FA Cup Final. But there was a personal honour for Adamson who was named Footballer of the Year, just ahead of Jimmy McIlroy who was in second place.

He went to the World Cup Finals in Chile during the summer as assistant to Walter Winterbottom. He impressed and when, in the following year, the FA were searching for a full time England manager for the first time they made their move on Adamson. It seems quite remarkable now that they wanted to offer the job to someone who was still a player and had no managerial experience.

He was 33 when he played in the FA Cup Final and over the next two seasons was not always first choice and eventually in 1964 he hung up his boots and immediately joined the coaching staff. His last game had come against Blackpool and he'd played no less than 486 games for us.

Over the next few years, unbeknown to most fans, he clashed with manager Harry Potts and it was inevitable that one would have to go. It was Harry and after a 5-0 home win against Nottingham Forest in February 1970 he was moved upstairs with Adamson taking over as manager.

At the end of that season he proudly claimed we would be the 'Team of the Seventies' and he promptly took us down after 24 years in the top flight. When things didn't go to plan in the Second Division the fans started to turn on him. Easter 1972 proved to be the turning point.

We lost 4-2 at Blackpool, after having trailed 4-0, and a demonstration ensued outside Bloomfield Road. Chairman Lord made insulting comments at the fans but Adamson, the main target, just got his head down and got on the coach.

Two days later on Easter Monday we managed to turn a 3-1 lead into a 4-3 defeat against Sunderland at Roker Park and it all started again. But amazingly from that day it all turned round. There were six games remaining that season and we won the lot and in the following season we lost just four times as we won the league and went back up.

Some of the football we played was just superb to watch and for two seasons in the First Division it looked as though that 'Team of the Seventies' tag could be fully justified.

We reached an FA Cup Semi-Final, we missed out on Europe by one point. That was in the first season back and the following year we were real title challengers until being hit by injuries late in the season.

Adamson had achieved this despite having his squad depleted. Martin Dobson, Geoff Nulty and Leighton James were all sold. Frank Casper and Mick Docherty suffered long term injuries whilst Paul Fletcher was also ruled out for long spells. It inevitably led to the poor third season that saw Adamson leave.

He wasn't out of the game for too long and he replaced Bob Stokoe at Sunderland. He soon surrounded himself with familiar faces. Dave Merrington joined the coaching staff and he signed Docherty, Colin Waldron and Doug Collins who were all playing their football away from Turf Moor after being released.

From there he became manager of Leeds and took them into the UEFA Cup. But overall he didn't have great success at either Sunderland or Leeds. One prominent local journalist once told me his career was always doomed to failure once he left Burnley, simply because he didn't want to be at any other club.

When he was sacked at Leeds in 1980 at the age of fifty, he decided to call it a day and left the game for good. He returned to Burnley where he still lives to this day. The only game he's ever seen at Burnley since leaving in 1976 was when he came as Sunderland manager.

It's often been said he wouldn't return but he did step back into the ground in January 2005 for our FA Cup tie against Liverpool. Incredibly the game was postponed and he didn't make it when it was played.

Subsequent to the above article having been written on the date of Jimmy Adamson's 80th birthday in April 2009, Burnley Football Club did again reach the top flight of English football and Adamson did return to Turf Moor. Adamson's return was for the opening of the Jimmy Adamson Lounge which is situated right behind the goal in the Jimmy McIlroy Stand. The photographs below show some of the memorabilia in that lounge including his Footballer of the Year Trophy from 1962 that had previously been on display at Towneley Hall.

Jimmy Adamson sadly passed away on 8th November 2011 at the age of 82 following a long illness. The club immediately confirmed that a minute's silence would be held at the reserve game that night and that there would be further tribute paid to him at the next first team home game against Leeds United, the last club he managed. Tributes poured in for one of Burnley's post war greats. 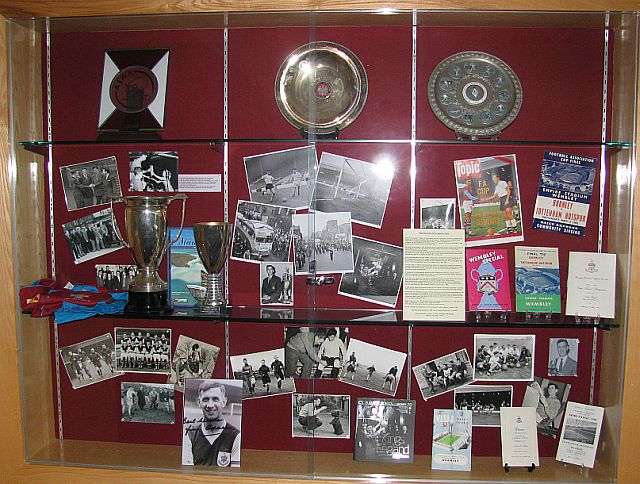 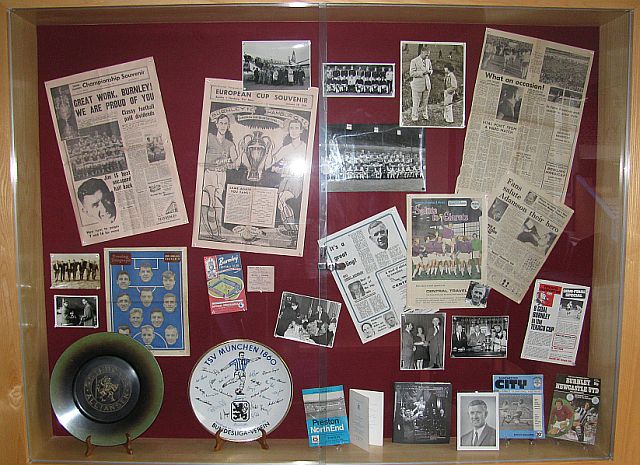 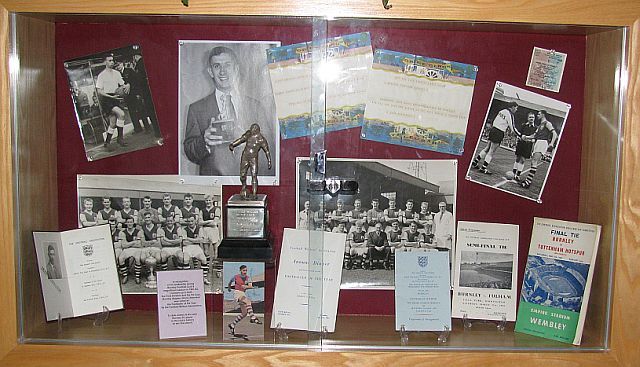