A return for some familiar faces

The Clarets will be desperate to try and get a home win. It's something that's not proved too easy this season with only six home successes in the league and just one in the six since the start of 2012.

Four have ended in draws but, apart from the Millwall defeat, only against Peterborough, in a game that ended 1-1, have we been behind.

We'll be looking to dent Birmingham's play off hopes whilst seeking revenge for our 2-1 defeat at St. Andrew's in November and it is a game that central defender Michael Duff is really looking forward to.

He'll be up against his former Wembley team mates Steven Caldwell and Wade Elliott, and he said: "I hope they get a good reception and I think they should do. They are two of my best mates in football, so it will be good to see them.

"They will both go down in history, Wade for scoring the goal at Wembley and Stevie for picking up the trophy. They were two great players for us and two good servants as well.

"Wadey did six years and came on a free and we didn't pay a lot of money for Stevie Caldwell either. It will be good to see them, but it's the same old thing that we will shake hands afterwards and have a chat.

"I think Graham Alexander and Stevie Jordan are coming as well, so it will be good to see a few of the old boys. But it will be bit more of a laugh and a joke if we've won."

Duff also commented on the disappointing home form: "We have sometimes struggled at home this year, but on Tuesday nights we seem to be all right so hopefully we can start well and get the crowd on our side and win the game," he added.

"The manager has made it quite clear that he doesn't want anyone to go into end-of-season mode because he has already started for next year. He has said people are playing for places and contracts etc for next season and I think Saturday showed that we are not just ready to see the season out.

"At 1-1 at half-time we weren't playing very well and we could have just chucked it in, but we are all professional footballers and most professionals don't like getting beaten at tiddly winks or chess, and so obviously a game of football you always want to win.

"If we win tonight I think we get back into the top half of the table, so that has to be an incentive for us."

Whilst not an injury crisis, Burnley go into tonight's game with some problems. Jay Rodriguez is again ruled out and he's now been joined by Martin Paterson who suffered another hamstring problem on Saturday at Portsmouth.

Neither will feature in the next few games and reports suggest it might be doubtful whether either will play again this season.

That gives Charlie Austin an opportunity to start, and it is a start he deserves after coming on for Pato on Saturday and grabbing his first hat trick in professional football.

The other problem concerns the left back position. Ben Mee has returned for the last two games but was forced off on Saturday suffering from back spasms.

It's touch and go whether he'll be fit and he'll definitely continue there should he come through. Danny Lafferty is still not ready to return so the likely replacement for Mee would be to drop Ross Wallace back and bring in Josh McQuoid.

Birmingham City were promoted with us in 2009 and lasted one year longer in the Premier League, suffering relegation at the end of last season. 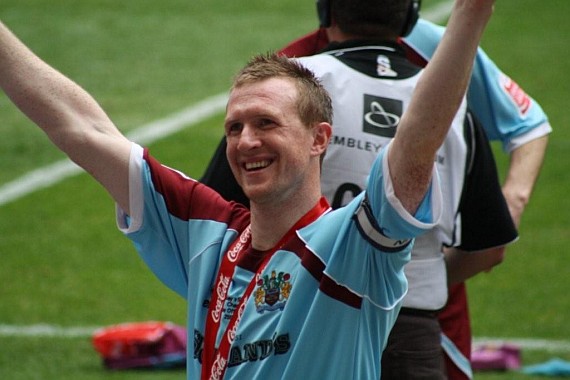 They've had a busy season, having qualified for the Europa League after winning last season's Carling Cup and that forced them to play a further eight games.

Those games caused a number of postponements in the league, including our visit to St. Andrew's, and left them some way behind the other clubs in terms of games played, so it was probably no surprise that they were nowhere near the top group until into February.

They are now very much promotion candidates, are fourth in the league ahead of three other clubs on goal difference. They will know that a win tonight will give them some breathing space although there is little prospect of them catching any of the top three. 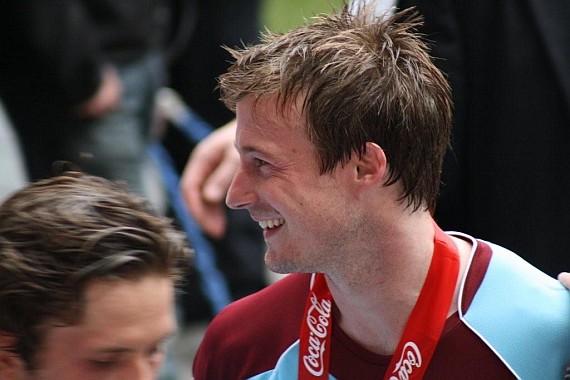 Like the Clarets they are quite dependent on their two strikers for the goals. Marlon King leads the way with 13 in the league and ten behind him is Nikola Zigic with ten, with four of those coming in the win at Leeds.

Chris Hughton has already confirmed that the squad will be unchanged from that which won at Doncaster on Friday night. That doesn't mean he'll be at full strength as they are without Jonathan Spector (thigh), Stephen Carr (knee), Pablo Ibanez (hamstring) and Keith Fahey (groin).

One former Claret - Wembley captain Steven Caldwell - looks certain to start whilst the Wembley goalscorer Wade Elliott will more than likely be on the bench which was as it was at Birmingham earlier in the season.

For both it will be a first return to Turf Moor since leaving the Clarets in 2010 and 2011 respectively. The last time Caldwell played against us at Turf Moor was for Sunderland in December 2006, a month before he signed, and for Elliott it was the FA Cup tie against Bournemouth in January 2005.

Last Time They Were Here

Birmingham's last visit to Turf Moor was in the Premier League and a day when we created a Premier League record by becoming the first newly promoted side to win their first four home games.

We'd already recorded 1-0 wins against Manchester United and Everton then followed that up with a 3-1 win against Sunderland and it was four out of four with a 2-1 victory against Birmingham.

There was a first Premier League game in Burnley colours for captain Steven Caldwell. He'd been out at the start of the season with an injury sustained playing for Scotland. He came in with Andre Bikey moving to midfield to replace Chris McCann who had suffered a serious knee injury in the previous home game.

There were no Burnley players passing on the team news to Birmingham players, unlike this week's episode at Preston, but it was all revealed to our visitors ahead of the game with an exclusive from Alan Nixon which infuriated some at Turf Moor.

Much of the first half was somewhat scrappy but we were much the better side and probably unfortunate not to take a lead into half time.

Things changed after the interval. We stepped things up and were far and away the better of the two promoted teams and this time we got the goals to show for it.

With just eight minutes of the second half gone, Tyrone Mears played in Steven Fletcher. The Scottish striker's shot wasn't dealt with very well by Brum goalkeeper Joe Hart and it flew into the net off his leg.

It was Fletcher's first league goal for the Clarets and he almost doubled that within minutes but this time hit the post and then Hart saved from him in the next attack.

Hart might have made the mistake for the goal but he was keeping Birmingham in the game with further saves from Mears and David Nugent but he could do nothing at all when Andre Bikey lifted the roof with a stunning goal, taking a return pass from Nugent before hammering home.

It should have finished 2-0 but right at the end we conceded when Sebastian Larsson converted a free kick, but a 2-1 win meant 12 points from the first four home games.

Click HERE to see all previous results against Birmingham City