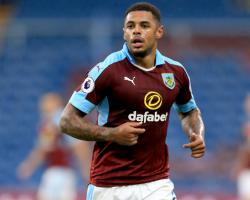 The 25-year-old sprung out of non-league football two years ago when leaving Luton for Brentford, and since a switch to Burnley 12 months later he has become a key Claret

Gray said it felt "crazy" to hit the back of the net for the first time in the top flight, after netting in the 2-0 win over Liverpool, but the goal was soon overshadowed when it came to light that he had posted homophobic tweets four years ago

He apologised in a statement on Saturday night and asked for "forgiveness", saying he was a changed man to the one who put up the messages

One of the messages read: "Is it me or are there gays everywhere? #Burn #Die #Makesmesick"

At the end of a day that Gray hoped would be remembered for a landmark goal in his career, he was making headlines for distinctly unsavoury reasons

"I want to offer a sincere and unreserved apology to anybody I may have offended in relation to these tweets," he said

"The tweets were posted four years ago when I was a completely different person to the man I am now."

He stressed he was " absolutely not homophobic" and added: " I can only apologise and ask for forgiveness to anyone I offended

"Thankfully I am not the guy I was back then and will continue to work hard both on and off the pitch to become a better person."

Anti-discrimination campaign group Kick It Out responded by saying: "We strongly condemn any discrimination and prejudice such as this has no place in football

"This incident should act as a reminder to all players of their conduct on social media."

On the pitch, Burnley are seeing the best of Gray

He set up Sam Vokes for his strike partner's maiden top-flight goal, followed suit himself before half-time, and was also named man of the match

Gray still has to pinch himself when he realises he is now a Premier League goalscorer, after Burnley's promotion

"I didn't really set myself a day to do it

It's been crazy and something I've dreamed of since I was playing at Luton," he told Clarets Player.

"It was a bit surreal even seeing the team sheet but I've got to believe I deserve to be here.

"It wasn't the easiest game to win but we got over the line and it was a great team performance."

All the statistics added up for Liverpool except for the only one which matters as the visitors enjoyed 81 per cent of possession and had 26 shots but only five on target.

Manager Sean Dyche was delighted to see his strike pair boost their confidence by getting off the mark.

"The link-up play between the two strikers was great for the first goal and to get both on the scoresheet is marvellous and good for everyone," Dyche said.

The last time Burnley were in the top flight in 2014-15 they took 11 matches to register their first win.

To do it in their second game will help settle the newcomers' nerves.

"It is important so you lot (the media) don't start the stories of 'How many games?'," added Dyche.

Record signing Steven Defour made his debut after his ÃÂ£7.5million move from Anderlecht and lasted 56 minutes, setting up Gray's goal with a quick break

"I said to him at half-time, 'Welcome to the Premier League'," Dyche said

"I think it was just a slightly quicker tempo than he is used to but we know he will mature with us and get used to the Premier League."

Liverpool manager Jurgen Klopp, despite being in the job for 10 months, is still getting to grips with just how difficult the Premier League can be

After the thrilling 4-3 opening win over Arsenal, Liverpool were expected to go to Turf Moor and roll over last season's Championship winners but found a team resilient in defence and ruthless in attack, whereas the Merseysiders were pensive, indecisive and lacklustre.

We have to accept it," said the German.

"We had six or seven times when Phil (Coutinho) was alone to shoot and then we passed and were in the box and lost the ball."